Sometimes I can't believe the crap people check out. It's very hard to not snicker, as I'm sure you can imagine.* Fortunately, I have this outlet. I hurry up and write down a title before it disappears forever in that black hole I call my memory (I know I've lost some good covers to the dreaded forgetfulness monster). Then I rush home to my computer, crack my knuckles, and get to snarking. Here's the most recent atrocity to cross my desk. Yes, someone ACTUALLY checked this out! Bless my patrons, they make my job so fun! 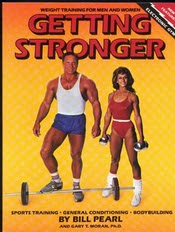 Just looking at this picture is getting me sicker. I can't decide if the mustard yellow/ketchup red color scheme or the obvious cut-out quality of the figures bothers me more. Probably the bad Photoshop. Let's look more closely, shall we? 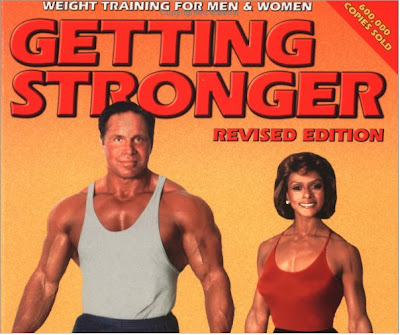 Ah yes, nice pearl earrings, Ms. Anonymous body builder who looks strangely like Janet Jackson. Y'know, now that I look more closely, I realize that the closeup is of the updated cover, and they've switched models. Instead of the mullet-haired trailer-trash in the original, this one is a helmet-haired bodybuildress of an indeterminate race. Yay for equality! Good ole Bill Pearl is the same, though. Whew. After 600,000 copies, you'd think he could change his wife-beater.

Finally, just for kicks, here's a picture of former Mr. Universe Bill Pearl. Looks like he's made of plastic, doesn't it? 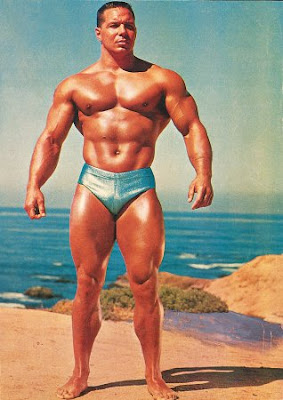 "My pecs are WA-A-A-A-A-AY larger than that other guy's! My buzz cut isn't quite as stylish as his mullet, though. Bummer, dude."


*Librarians in the crowd: What is(are) the weirdest thing(s) you've ever seen someone check out? Right now I think it'd have to be the guy who checked out the Tanakh (the Jewish bible) and Mein Kampf. Oy, mein Kopf!

UPDATE: DocTurtle just pointed out that it's Mammary Monday. I think I covered that anyway, don't you?
Posted by Miss Maggie at 10:16 PM

Why change wife-beaters when you can just change wives?

I can't believe it. My dad had this book when I was growing up. It mostly sat (unused) on the weightbench that for some reason took up two-thirds of my room. I was always creeped out by the cover of the book and thought that dude on it looked too much like a bulked-out Michael Eisner. Kind of Ah-nuld meets Mickey Mouse.

I actually used this book when I was lifting for baseball as a teenager. It's absolutely hideous. Oddly, though, the contents are excellent, with tons of exercises and good diagrams for each one.

It just needs a nice wrap around it...

I want to poke Mr. Pearl's thigh with a needle to see if it bursts.

The female model is the same in the two covers, her hair and clothes were photoshopped, though. Bill's shorts were lengthened, too.

I noticed after I had posted that it was apparently the same model. That makes the Photoshopping even worse, if you ask me.

Perhaps you lonely overweight librarians should try hitting the gym sometime, instead of spending your evenings making sure the card catalog is in proper order, and then going home to your empty apartment to hang out with your cat.

That man is Bill Pearl. In the bodybuilding world, he is a legend, and perhaps unlike myself, one of the nicest and most humble people i have ever met.

His books and articles have helped thousands of men and women get into shape.

That man of "plastic" has more integrity in his little finger, than all of you have put together.

Now go home to your cats.

It's a great book.

The woman is Bill Pearl's wife, who works out with him every morning.

When I first bought this book in the early 1990s it was one of the only books which encouraged women to lift weights by having one on the cover! It was incredibly inspiring for me.

Now there are a ton of books for women and weight training. But many of them are silly or wimpy or both. This book (now updated with new information) is still one of the best for women and men.

It has sold, and is still selling, based on its contents--not based on the cover. Which sucks, I agree. But who cares? You know what they say...Don't judge a book...