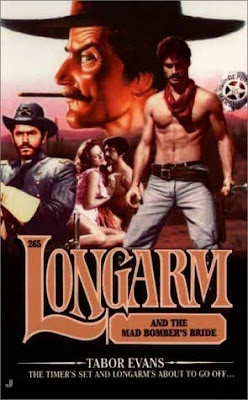 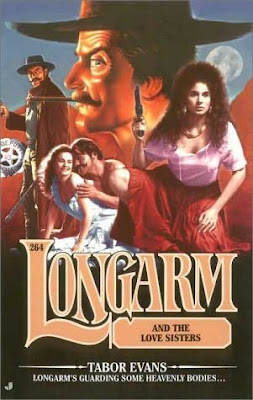 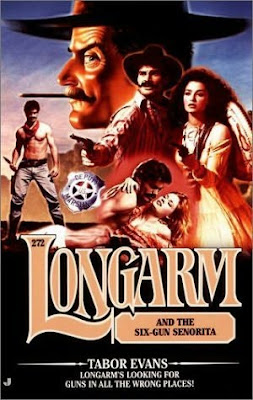 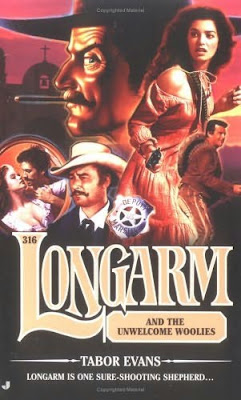 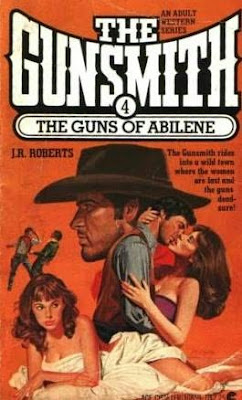 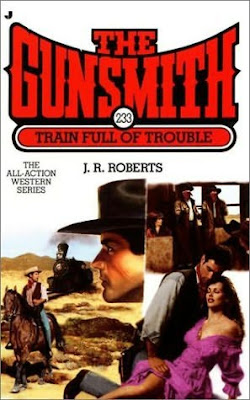 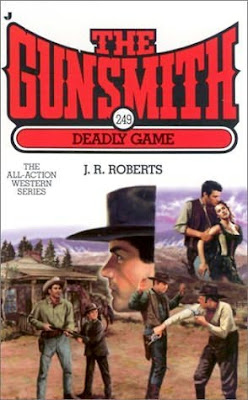 http://www.fantasticfiction.co.uk/r/j-r-roberts/
Posted by Miss Maggie at 10:45 AM 10 comments:

Judge a Book by its Cover NEWS FLASH 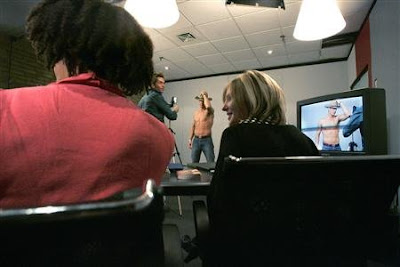 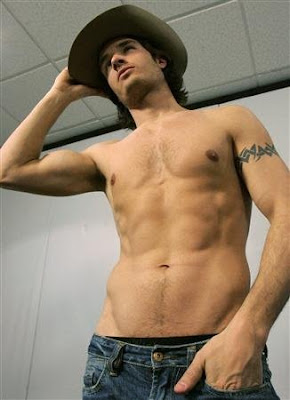 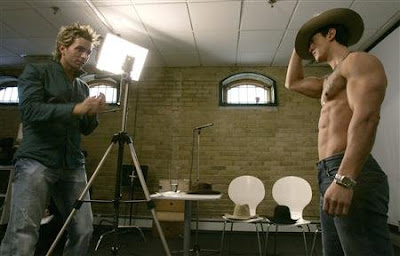 Harlequin books seeks "real men" for covers
Sat Mar 24, 2007 5:05pm ET
By Jonathan Spicer
TORONTO (Reuters) - Real men don't pose for the cover of a Harlequin romance. And that's something the publisher wants to change.
Representatives of Harlequin Enterprises, the world's biggest publisher of romance novel series, inspected the assets of about 200 men who lined up at a Toronto casting house on Saturday to prove they could flutter readers' hearts better than professional models.
"We're looking for some guys that are not your usual models, but have that iconic look that women go for -- sexy, sensitive, beautiful and fit," said Harlequin spokeswoman Marleah Stout, who attended the open casting.
"We want real men ... exactly what you think in your mind when you're fantasizing or imagining that ideal man."
Toronto-based Harlequin, a division of newspaper group Torstar Corp., sold 131 million books in 94 countries last year. It estimates that a third of American women have read at least one of its titles.
Until now, the publisher relied on modeling agencies to supply bodies for its concupiscent covers. But the readership -- predominantly female and averaging 42 years of age -- was upset when slight, young cover models clashed with the brawny, mature heroes described within.
"Some of the heroes are captains of industry, billionaires," said Deborah Peterson, a Harlequin creative designer and a judge at the audition. "A lot of the models were too young, men in their twenties ... and our audience likes men a little bit older, a bit bigger, than the runway models."

At the Toronto casting, chiseled hopefuls shed their shirts and donned a cowboy hat for the panel while a handful of other judges watched on closed-circuit camera in an adjacent room.
Several were asked to return for a book cover shot, where they may earn up to C$250 ($215) an hour, according to male modeling agencies.
Others indulged their own fantasies.
"From what I understand, (Harlequin) readers are women who want to escape from the relationship that they're in," said auditioner Carlos Troccoli, 30, who was tall, sturdy and muscular. "I can bring that to them."

Yeah, just what I want to see on Harlequin covers. "Real" men with beer bellies and wife beaters who think of readers as sex-starved housefraus. Of course, check out the pictures that go along. Obviously this one guy had the "right" stuff...if you know what I mean...and I think you do...yummy.
Posted by Miss Maggie at 10:30 PM 2 comments:

Email ThisBlogThis!Share to TwitterShare to FacebookShare to Pinterest
Labels: News you can use 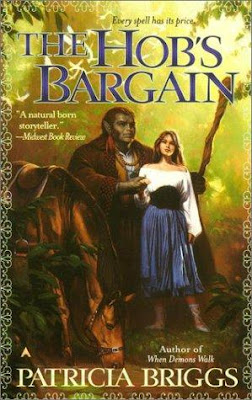 So today we move out of the realm (sort of) of Romance and into the realm of Fantasy. I love fantasy. If I could ever think up a plot, I would write fantasy. But I would never, ever, agree to a cover like this one. Giant-creepy-elfie-guy weirds me out. It makes it much worse knowing, as I do having read the book, (spoiler alert) that our heroine winds up romantically entangled in a happily-ever-after kind of way with him. Ewwwwwww. After her husband is killed off on the first page.
Why, you're wondering, if the cover is soooo bad, why oh why did you read such a book? Well, here's the thing. Patricia Briggs is my favorite new-author-that-I've-just-discovered-in-the-last-few-months. She writes completely readable, interesting, high fantasy. I really enjoyed her Dragon series, and Hob's Bargain was a good book, too (if you cover it in brown paper, first). She's recently branched out into dark fantasy. Check out this cover: 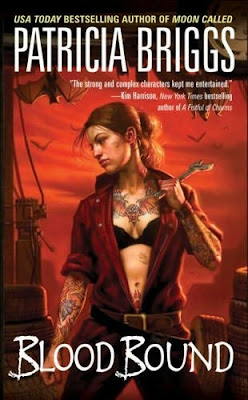 I don't usually think of girls this way (I'm not that kind of girl), but that cover is HOT! Smokin! That cover influenced me to read the rest of Patricia Briggs, and I'm really glad I did. Thank Gd I didn't see Hob's Bargain first! 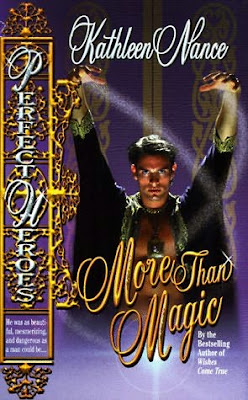 So sometimes I wonder how the models feel when they're posing for these kind of pictures. What was this guy thinking? Probably something along the lines of, "I can't feel my hands!"

I do, however, like the sexy genie/gay pirate vibe I'm getting from the earring. It's too bad the model looks like such a twit.

Let Me Come In 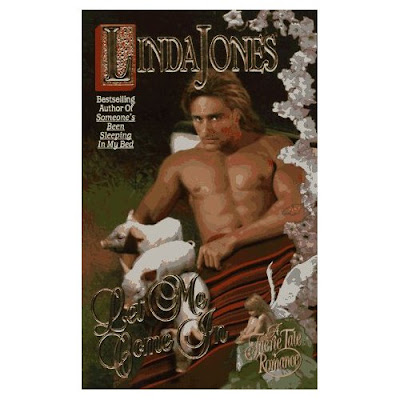 I knew when I first saw this that it was the cover to begin this blog with. It probably influenced me to write the blog in the first place. I mean, it's just sooooo perfect. There's the pigs, the come-hither look on the mostly naked hunk, the hand in the process of removing the blanket (and uncovering more of the naked hunk?), the little fairie in the corner (the book is part of a series called "Faerie Tale Romance"), and oh, yeah, did I mention the PIGS?!?

Apparently this book is a take off on classic tale of the Three Little Pigs. Benjamin Wolfe's family is run out of Piggville, TX in his youth, only to return and, in revenge, attempt to seduce the three Pigg sisters (I swear, you can't make this shit up!). As the jacket says, "(h)e'd drag their family name through the mud, and see to it that, whether their homes were made of straw, sticks or brick, the sisters would ultimately be forced out of town."

Is there such a thing as driving a point into the ground and then stomping on it? Yes. Yes there is. Or, I suppose, have it trampled by pigs.

UPDATE: I figure there might be some of you out there that, for some strange and twisted reason of your own best not gone into here, would like to purchase a book I showcase. I have decided to provide you a link to my all-time favorite stie for author and book information, www.fantasticfiction.co.uk for each book I show. Enjoy! http://www.fantasticfiction.co.uk/j/linda-jones/big-bad-wolf.htm
(p.s. This book has a different title and, sadly, a different cover for the British version. Maybe the Brits have some taste?)
Posted by Miss Maggie at 6:01 PM 7 comments: