Okay, I'm going to get to the cover snark in a second, but first I need to tell you about my new all-time favorite patrons who came in today. Picture a little old couple at about eighty years old, New Yorkers who now spend part of their time in Asheville, NC and the other half in Palm Beach, FL. So I'm sorting CDs (a fun glimpse into librarian life) and the little old lady comes up to me with two books, one a chick lit-type book and the other a Robert Patterson. "Which would you recommend?" she asks. I answer that I haven't read either, but Robert Patterson seems popular. She tells me that she wants something light and fluffy to read at night, no violence. I say that the Robert Patterson is definitely out. So we go over to the New Large Print section from whence her selections hailed, and I see a Joanna Trollope romance. I say that either the chick lit-type book or the Joanna Trollope would probably be light and fluffy enough (throwing in what I think is important, that Joanna Trollope is descendant from the great Anthony Trollope, but I digress). She says "yeah, but which would you read?" So I say that I'd probably be more interested in reading the chick lit book, but she might be more interested in the Trollope romance. "Of course," I say, "I don't know you so I can't be very sure what you'd enjoy." She asks me what the difference is, and I say that the chick lit is probably a bit more "risque." She says, really loudly, "Gee, you don't know me! I'm a SEXY BITCH!" Her husband chimed in to concur. It was the CUTEST thing that anyone has ever said to me. I just wanted to give her a hug.

She ended up taking both books. We'll see which one she likes better! 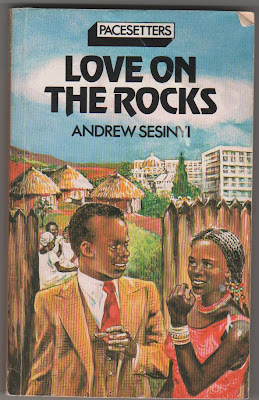 Anyway, got a nifty book in the trusty ole mailbag today. Having mentioned in the past something about Botswanan romance novels, faithful reader Kyle E. sent me an ACTUAL Botswanan romance novel!
Apparently it's kinda a small-town guy meets up with a big-city girl type thing. I'm enamored of their sign language. He's saying, "Hey, this is Love on the Rocks! Where's my martini?" and she's saying "Have some of my apple instead." I don't know what kind of pace they're supposed to be setting, but with communication like that it's going to go SLOOOOOOOOOWLY.
Posted by Miss Maggie at 10:32 PM

dude....I actually thought he had a martini the way he was holding his hands. I didn't realize the truth until you said something.

I read something completely different into those gestures.

See, I go around yelling "I'm a SEXY BITCH" all the damn time and everyone just looks vaguely uncomfortable and refuses to meet my eye! What's wrong? Is it my hairdo? My breath? My penis?

"Tonight on TNT: Sidney Poitier and Keshia Knight-Pulliam star in the cable premier of Love on the Rocks, Andrew Sesinyi's gripping tale of whimsy and white-tie state dinners in the heart of war-torn Botswana. Catch it at 9:00, or again at midnight."

That story is such a hoot! I wish I had patrons like that. And I love your cover snark, such fun!

I like how the girl on the cover looks like she's picking a fight with the guy. :) Love, Sexy Sadie