So, in tribute to Robert Jordan, I've chosen to mock the first four covers of the Wheel of Time series today. I hate these books, not because of their subject or anything to do with them as books (I find them kind of boringly typical epic fantasy bildungsromanen, and if you've read one, you've read them all), but because THEY DON'T FUCKING FIT THROUGH THE BOOKDROP!!! At least once a week I get a fourteen year-old boy with hygiene problems and a mullet bucking the check-out line to hand me a Robert Jordan book that won't fit in the drop. Dammit, Robert, did you have to write such tomes? I thought not.

But anyway, the covers are so typically traditionally epic fantasy'y that they really don't deserve too much in depth snark except to give new dialogue to the people on the covers. I give you ROBERT JORDAN IMPROV THEATRE! (I apologize in advance for my crappy crappy utilization of MS Paint. And the lameness of this post. But hey, that just means that this is your chance to snark on me!) 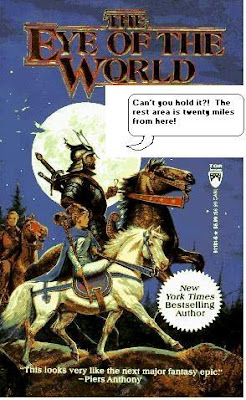 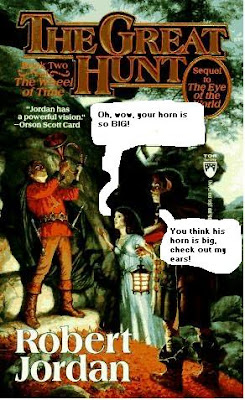 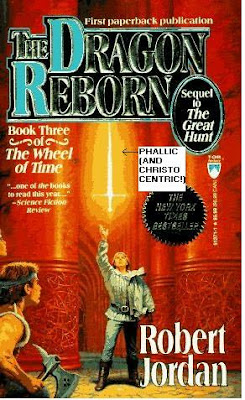 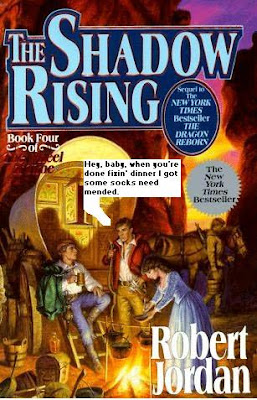 P.S. Be sure to stop by Wednesday for our Baen Belly Button Day (Wednesday is halfway between Mammary Monday and Phallic Phriday, after all)*! And tune in next week when we resume Mammary Monday funness. And I promise never to do something as lame as this again. :)


P.P.S. Damn you, blogger, for screwing up my pagination again! It vexes me!

*Thanks to VembaTsith for making the name up!

I'm sorry, in no fantasy world, no matter how fantastic, is it ever epic an awe inspiring to left a french horn majestically above your head.

How does the artist manage to make everyone look incredibly tiny? Are they all hobbits? Halflings? Brownies? The Shadow Rising shows the little people in all their itty-bitty glory.

I was asking the same thing than Snow... That made me laugh a little, specially the first cover.

I'm sorry to know about Jordan. My respects to him