So I'm trolling the internet for book covers to amuse my masses (are you amused yet?), and lo and behold, seems that All About Romance Novels has been having cover contests since 1999! They were doing Worst Cover of the Year long before I came on the scene. I highly recommend you spend an hour or two wandering around and check out their picks. My Phavorite Phallic Phrolic? This little beauty typifies all that is wrong (but oooooooh so right) with historical romance covers. I've stolen the comments from the lovely ladies (and bulked-up gentlemen?) at All About Romance Novels for your perusal. Oh, by the way...the heroine's name? Caroline WHITE. 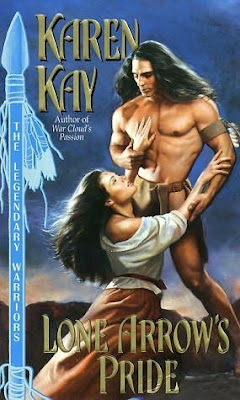 Lone Arrow's Pride was the fifth place choice. It's a classic example of the "extremely overt sexuality" type cover that most fans feel romance has long since outgrown. The heroine's subservient position is bad enough, but just in case the reader misses the point, there's a very phallic-looking spear on the cover. Many voters described this cover as a throwback and bemoaned the fact that it seemed to include every possible romance cliché.


Cheryl chose it for that reason: "This encapsulates all that's horrible in romance covers - the awful, submissive pose of the woman, the stereotypical Indian-white woman cliché, the bulked up beyond belief male. Just ick."


Carrie said, "Lone Arrow's Pride is the biggest stinker of them all. Nice phallic symbol and kneeling wench. But an impossibly built hero in a bad wig and a loin cloth is perhaps the biggest turn-off of all."


And this from Elizabeth who makes a good point about the title: "They're all marvelous, but this one's too amusingly phallic to pass by. Looks more like an obsessed groupie cornering a member of the Village People than any fantasy of mine. Obviously he has no issues with pride - I'm more worried about what's happened to hers."

It's interesting to note, however, that several voters really liked this cover. So while some of us may feel it is stuck in the past, others feel that this type of image is what romance is all about.
Posted by Miss Maggie at 7:12 PM

And what is with the bare shoulders? These women need to buy clothes their size.

What direction is the wind supposed to be blowing in that picture?

Kitsune: it's the gag reflex that you want to watch out for!

Oh Maughta, I'm so glad I didn't follow the links while at work. I can't stop laughing at the very funny folks at at All About Romance. You've done your good deed for the day.

Jeff: the wind is being generated between them, by the incredible power of their PASSION!