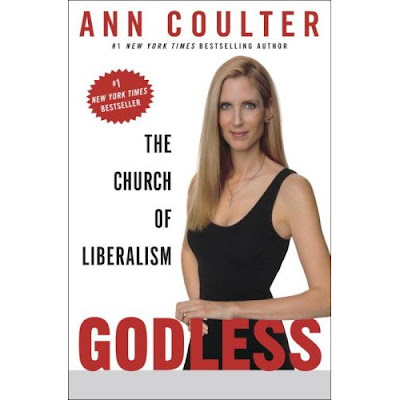 I love this cover, and I'll tell you why. Every time I see it I think it's saying that Ann Coulter is Godless, and I think, "yup." Or, at least, Gd-awful. Something about the way she's leaning on the word tells me that she really owns it, you know what I mean? Leaving aside, for the moment, the question of whether or not Ann Coulter is a man (but pointing out that she's #80 on the Phoenix's list of the 100 unsexiest men in the world), she really has a lack of taste and artistic je ne sais quoi, if you know what I mean. She does this shoulders turned three-quarters and face full-on to the camera angle for every book. It's really irritating. And what is that grey bar on the bottom all about? I though conservatives only saw thing in black and white? Ewww, I have seen the devil, and he's a ten-foot tall woman who weighs ninety pounds.
Just to counterbalance the absurd above, here's some absurd below. Judge a Book by its Cover is nothing if not fair and balanced, yeah? 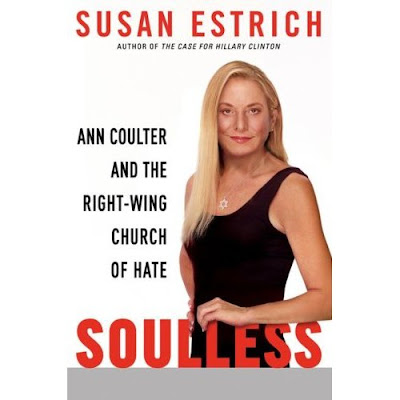 One thing I've wondered about that Coulter cover since I first saw it: Is that a literal, physical series of letters that read "GODLESS" that she's leaning on? Or is it photoshopped in later, which means her arm is just kind of hanging in mid-air?

I didn't believe that the Soulless cover was an actual cover to an actual book until I checked the Amazon link. That just freaks me out. I don't care if I agree with everything she says. I'll probably have nightmares about it for weeks.

I refuse to admit that I made the it's/its mistake. All trace has been wiped away. You can't prove a thing. There's no 18-minute gap. I don't remember anything.

(Oh, damn, I'm an idiot! Ironically I make fun of people who make that mistake. Ha, ha, Maughta is a moron!)

Ann Coulter gives me the shivers.

And I agree, Bridget--I may agree with the Soulless book, but that doppelgangery cover is freaking creepy.

In her defense, did she have much to do with the cover other than posing for a picture? I have no love for Coulter, but irritating? Why? It seems a standard cover pose.

Personally, having willfully abandoned the mental illness of ideology, I simply don't care about people like Coulter or Estritch. They say what they say to make sales. Same with everyone from Linbaugh to Michael Moore.

If you have any strong feeling for either of these women, for or against, they got you. Let it go. Fool you once, shame on them, and so on.


>>> I though conservatives
>>> only saw thing in black and white?

Isn't that statement itself describing things in black and white? Let it all go. You'll feel much better once you abandon ideology. Suddenly the world is full of possibilities beyond whatever narrow school of thought you once held dear.

Not to start a flame war in these hallowed halls of snarkdom, but it's impossible to abandon ideology. Ideology is a framework for viewing the world; whether we like it or not, we all have our own ideologies. A common misconception is that an ideology has to manifest itself as a political inclination or proclivity; it doesn't. "Ideology" refers to nothing more than a collection of events, experiences, and personal idiosyncrasies that makes us see the world in whatever light we see it. To claim that you have no ideology is to claim that you do not interface with the world, that you are outside of it somehow. I very much doubt that's what you mean to claim.

No, I was speaking of specific ideologies. The "one size fits all" approach to solving problems, or "toeing the Party line" as some put it.

For the typical Left/Right example, you wind up with people insisting that the government is the only solution arguing to the death with those that insist that privitization is the One True Way. And in the end nothing gets solved. The "Kool-Aid drinkers".

And even with your broader definition my statement holds. One needs to look beyond whatever POV their life experience has given them. Walk a mile in the shoes of others, in other words, even only in one's imagination. An astonishing number of the world's cultural and political problems would evaporate overnight if most people could do this. So many are caused by people's willful blindness and stubborness.

Absolutely. I agree with you completely: a little empathy goes a long way towards solving difficult problems, or at least reaching comprises that allow those problems to be avoided. But I would continue to argue that empathy and absence of ideology are entirely different things. One can perform thought experiments wherein alternative points of view are tried on for size, but this doesn't mean that one has abandoned ideology completely; without a suitable framework for viewing the world, we become anomic ciphers, vessels for whatever view gets poured into us.

I have a feeling that we're arguing the same thing politically while coming from different philosophical directions. I'm equally annoyed by left-wing demagogues as by right-wing ones; they're typically snake-oil salespeople trying to peddle worthless one-size-fits-all panaceae. You're calling them reddish-orange, I'm calling them orangish-red. :)

As a Christian conservative (but from Britain where we don't fit quite the same stereotypes), her appearance certainly doesn't say "Godly" to me, so yes, the first impression is the title could be about her.