So it's Phallic Phriday and once again we have a Baen title. Oh, Baen, you never cease to amuse me. 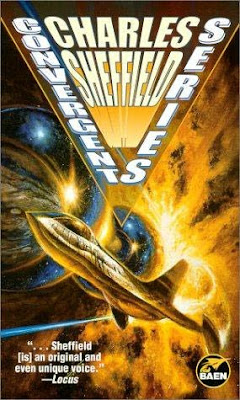 Yes, yes, phallic phlying of the phreindly astro-phields. But it's not the bulbous ship entering the ovuloid planet (ooh er) that is the silliest thing on this cover.

No, it's the stylized title/author's name that really gets stuck in my craw (ooh er). That looks nothing so much as something a pimply teenaged boy would draw for his favorite metal band, Charles Sheffield, and the band's new album Convergent Series. When it takes me several seconds of staring at the cover to make out that name (and trying to parse Seires), well, that right there is a cover fail. Ooh er.

Yikes. Sad that the title looks like it was put together using Microsoft's "Word Art" tool.

As you say, it takes several seconds for the name and title to truly register... But then my eye kept looking for the ACTUAL title (since it implies it's part of a "series"), and was never satisfied.

Not only is the title bad, but its shape is distinctly like a stylized wossname, that hairy bit above the naughty bit on a girly bit.

I din't know if that's deliberate or not. It's the only reason I can think of for such a poor piece of text work.

The author/title part is an epic fail. Way too hard to decipher. When you consider all the layout fun they could have had with the CS/CS combo, and this is what they did?

The weird way they laid out the title *might* almost sort of work if the two words ended with the same letter (I stress, might--I'd have to actually see it to say for sure). But they don't, so it definitely doesn't.

It took me two looks to register that "Convergent Series" _was_ the title. >_<

An inverted version Star Wars opening narrative crawl would have been a much more legible way to lay out the author and title and still get the visual play on the concept of a convergent series.

Saying that the author is "an original and even unique voice" is not necessarily a glowing recommendation of the story/writing/book.