Happy Sunday - here's your Pop Sensation crossover post. It's not the sultriest of covers, but it'll have to do... 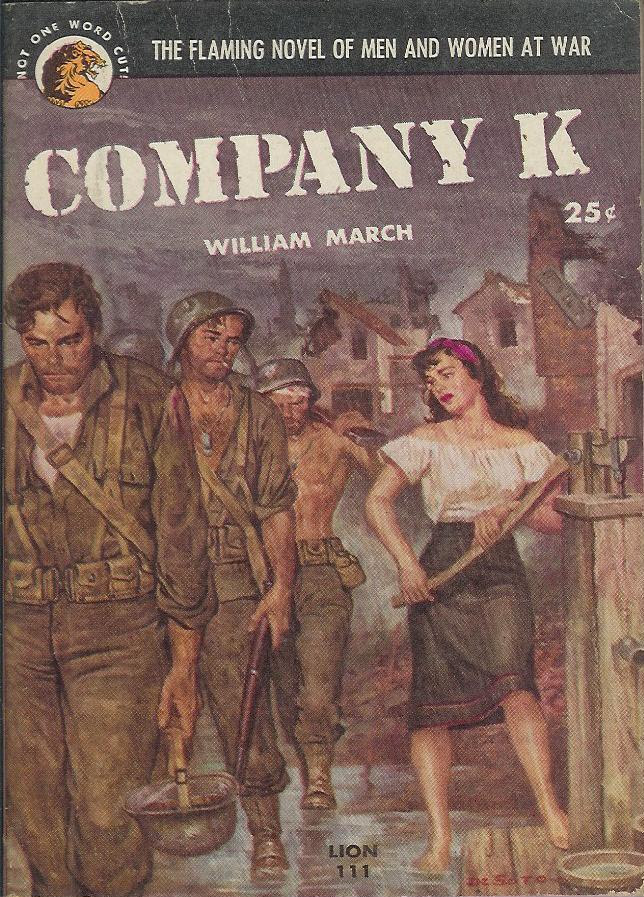 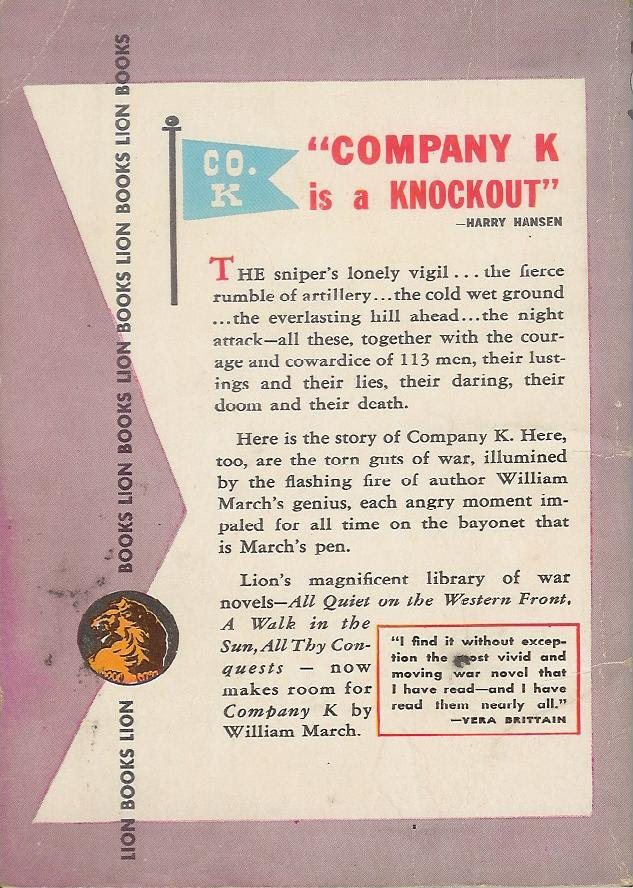 
This is a pretty famous and well-received novel of W. W. I, organized into micro-chapters about every single man in the company. Blurbs inside from Granville Hicks, Graham Greene, James T. Farrell, and Phyllis Bentley (whoever that is).

On Monday a kid from my company named Ben Hunzinger got fifteen years hard labor for deserting in the face of the enemy, and a long talk from Mr. Fairbrother about justice tempered with mercy.

Whoa, "Mr. Fairbrother?" Is this an allegory?

At least George Eliot wasn't THAT obvious when she called her priest "Farebrother".

Dear originality, where hast thou flown to?

I don't know about expertly painted. Guy 1 has no neck and guy 2 has an apparently flat topped frankenstein skull judging by the way that helmet sits.

But the phallic pump handle cracked me up. So obvious!

Guy #1 reminds me of Galen Tyrol from Battlestar Galactica. Aside from the facial features, "lost all hope" and "droid or something" describe Tyrol, too.

My favorite is the little circle on the front cover that reads "Not one word cut". I guess this is a plus in their book.

Gotta agree, the first guy looks totally dejected and hopeless, although I suspect the Lightman Group would say he looks guilty. I'm pretty sure the girl is checking out his butt, though, which might cheer him up.

Look up William March on Wikipedia. Company K was actually a pretty serious book. The cover on this paperback makes it sound like a salacious novel (especially the lady with the pump handle) but from the Wikipedia article it was anything but sexy.

This painting is great. The complexity of color, the composition, and especially the burned out background city. All lovely. I mean, as lovely as war gets, I guess. And yes, William March was a serious author and this book was quite well regarded. But, as people on my site have pointed out, those soldiers are Not from WWI. WWII soldiers used to sell a WWI book to ex-WWII soldiers.

I want to know why lustings and lies are plural, but daring, doom, and death are singular. Well, OK, "death," that's pretty much one to a customer.