So my Mom (the ever-popular commenter Maughtamom, for those of you who need obvious things pointed out, which I know is none of my super-smart and super-cool readers so this whole aside has been pointless) looks over to the sidebar at the random books from my Library Thing account and keeps asking me why I read such crap. I argue with her that, of course, taste is subjective and she's just wrong (as all mothers are at one point or another accused by their offspring), but then I find myself reading such tripe that I wonder why I even bothered wasting the time that could have been spent, I don't know, watching the ceiling fan spin and the dog hair collect in the corners of the room (an ever popular spectator sport in my house), and realize that my mom is, of course, right (don't tell her I said so!). And I've written the preceding two sentences (which may possibly be the longest sentences ever seen on this blog) because I find myself reading the book How to Teach Filthy Rich Girls by Zoey Dean.
It's a terrible book whose general premise is that rich bitches (think the Hiltons) are simply misunderstood and smart people who graduated from Yale with English degrees really just need to learn how to groom and dress themselves (and get the mandatory Brazilian wax). Why yes, that is the plot of every chick lit EVER now that The Devil Wears Prada has shown us how it's done. And I'm pretty sure that Zoey Dean doesn't actually exist (the author bio is scanty, there's no picture, and the book is copywritten by Alloy Entertainment which has its own nice little graphicon and a swanky address in New York).

But I know you didn't come here to get a literary review, you came here to see stupid covers, so here ya go: 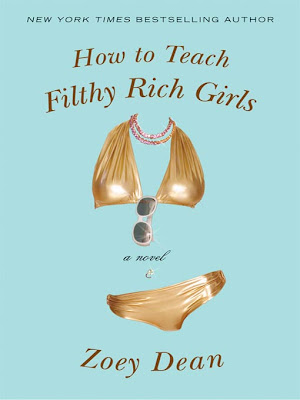 I find it odd that we no longer need a chick on the cover of our chick lit, simply a shiny bikini and lots of bling. No nipples, though. That'd be too salacious. Never fear, although there is not actually a strappy high heeled shoe on the front cover there is one on the spine. Whew. For a second I though we'd forgotten the most important part of the cover. In case you're wondering, it took way too many people to design this cover; although I'm not sure if one should credit the cover designers listed on the back cover (the grammatically weird 3 Good, Poor Girls) or the gots-t0-be-a-pseudonym "book designer" listed on the inside page, Fearn Cutler de Vicq. Perhaps "book designer" is what they're calling ghostwriters now?

Oh, and Phoebe and Burnsie have informed me that since I mentioned their hairballs earlier I must post more pictures for their faithful fans. So for those of you who come here NOT for the funny book covers but for the gratuitous dog pictures, here you go. 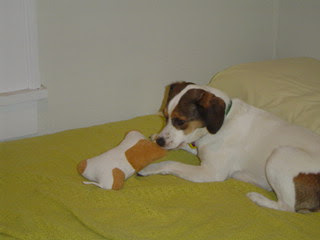 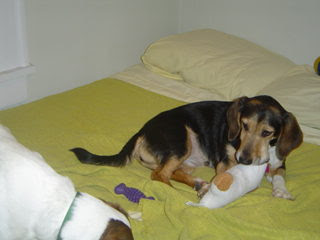 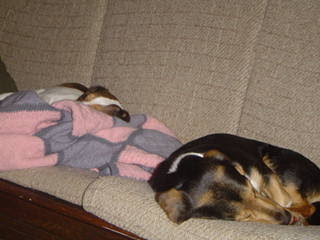 There can be something immensly satisfying in reading a trashy book, as long as it's the right kind of trashy.

I think the book designer is the person who decides on font, page layout, and so on inside the book. (Remembering this from my "History of the Book" class.) So the gramatically-questionable people are probably the sole cover designers.

I'm so happy. I finally got the recognition due me. I've been telling you for years to read better books, like James Patterson. Maugtamom

Just so you know, a Book designer is someone who chooses the fonts, makes the book fit a specific trim size and page count. Unlike the jacket designer, what I do is more closely connected to production. I have nothing to do with the writing of the book. As someone who worked in a library and saw "thousands of books a week", you are sadly uninformed about how books come into being. - Fearn Cutler de Vicq