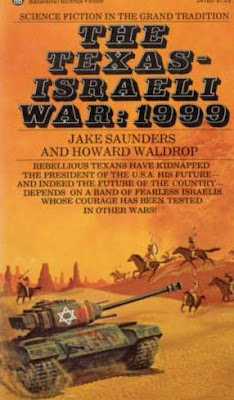 Just in case you're not worried enough, here's the blurb:

On August 12, 1992, England's tiny nuclear arsenal fell on Ireland, on South Africa, and finally on China. Instantly the planet went up in flames. In the first half year of what was to be called the War of '92, half the Earth's population perished. The United States was reduced to a vast underpeopled land -- and, to make matters worse, Texas had seceded and taken her precious oil reserves. But Israel, virtually untouched in a world ravaged by war, was painfully overpopulated.

OH MY GOD SO MUCH AWESOME

My favorite thing about the concept is that the Israelis come through the global cataclysm completely unscathed. 'Cause it's not like they have any enemies who might like to use a worldwide free-for-all to settle a score with or two with them. No sir.

Re: the cover, I find it hilarious that the Texans, with their "precious oil reserves," are on horseback, while the Israelis, who last I checked have no oil reserves, are in tanks. Oy gevalt!

The Israelis always make it in these apocalptic dramas. In the Left Behind novels, they invent an agricultural technique that "makes the desert bloom" and, subsequently, become the richest, most powerful entity on earth. And the Arabs try and attack them for this wealth and are vanquished. What a nice little world the Left Behinders live in, yeah?

Laura gave me the link to your blog and all of your posts are hilarious! :) I need to ask my Bubbee why she never told me about the Texas-Israeli war...

What impresses me is that Howard Walrop is capable of writing a decent piece of fiction; he seems to have just rolled a 1.

I remember this one when it was first on the stands. You used to see that typeface all over the place. Waldrop is the co-author of the classic novella "Custer's Last Jump," which is the story of the Little Big Horn except the cavalry and Indians have aircraft. It's partially narrated by Mark Twain.

Oh dag, Josh made my comment before I got a chance - yeah the ISRAELIS are going to be among the last men standing...

Oh, my dear, dear friend! You've gone around the bend with this one. Why have you been holding out on us? I can only think of A.-J.....

So, where does one get an anti-tank pony?

umm... one question. Where did DocTurtle pick this up?

I'm guessing he received it for free in his membership package when he joined the militia. It also came with a patch, a set of stickers, and an 8x10 of George Bush wearing a coonskin cap!

I had this book. It was published, I think, in the mid `70s, before the Egypt-Israeli Peace.
The main character (the commander of this Israeli brigade of mercenarires sent to Texast to rescue a kidnapped U.S. president) was a veteran of the Israeli invasion and conquest of Cairo...

snow: I got it at Richard Van Nice's bookstore in Helena, Montana, back int maybe 1990 or so. It was in the freebie bin on the porch, and the title was just irresistible.

I have two things to say:

1) ROFLMAO, I love your entry about this book.

Speaking as a Scot I find the idea of an nuclear-armed England rather scary. Regardless of that, wouldn't nuking Ireland be rather counter-productive?

The bizarre thing to me is that Howard Waldrop is quite a brilliant author. He just seems to have fallen off the deep end with this one.
For anyone who hasn't read any of his stuff, 'Ike at the Mike' and 'The Ugly Chickens' are both great, IMO.

I also own this. I picked it up at a Half-Price Books in Texas, understandably for the hilarity of the title and cover. I actually tried to read it. It's pretty rare that I find it physically impossible to finish a book, but this one vanquished me only a few chapters in. It was just outstandingly awful. And uproariously funny.

I would also like to point out that the Texans actually appear to be Native Americans.

OK, now get this :
im from Israel.
I got here when trying to google an old book I saw about 7 years ago in some 2nd hand book shop (yes, in Israel. yes, in english. I dont think they translated this work of fine art...).
Anyway, the moment I saw it I knew its a must have cult book that can make any party come to live. but didnt have money, so went back a week later just to find out its gone.
Now I see they sell it on Amazon.
oh ye, my next party gonne be a theme party - come dressed as a jew, or texan...

I have this book, I have read (finished!) this book, this book totally makes me laugh. It came highly recommended, but the guy who said that... he just needs to get out more.

We Texans must have babies with Jewish women to avoid this war. Lots of babies. Peace children! My peace is growing already.

Yes, agree with Josh: "OH MY GOD SO MUCH AWESOME!"

Gah, this is just a terrible book. I somehow got a copy in the '80s. I honestly don't remember how or from where. I'm assuming 25 cents at a garage sale, or maybe someone just foisted it on me when I wasn't looking.

Anyway, it's a rare book I can't get through, and this one is so awful it just beat me. I tried four or five times, years apart, and I could never make it more than three or four chapters in. Terrible.

Even so, it stayed on my pile of paperbacks 'things to get back to' for twenty years until I finally said "What am I thinking?" and got rid of it.

This was my absolute favorite book when I was in high school. Great stuff. I know Howard but haven't every had the pleasure of meeting him. Check out his other masterpiece, "Them Bones".

I just saw this book again, on a repeat of the late night Jimmy Fallon show.

They are? I picked up a copy at Half-Price books for less than three dollars.

I haven't read this book because I don't want to buy a book without reading it, and I can't request it from any library in the state...

...but for those of you who are surprised the Israelis are the last ones standing, this was written right after the Yom Kippur War, where Israel pretty much kicked ass despite its PM gutting its military...

I found a copy in a box of forgotten treasures in my basement. As a retired military man I found parts facinating and as someone who reads a lot I appreciated how much I laughed. Definately different and amusing.

The tanks are atomic-powered, no need for oil!

I bought this for my dad when I was twelve, because he's from Texas. He thought it was weird. I should read it.