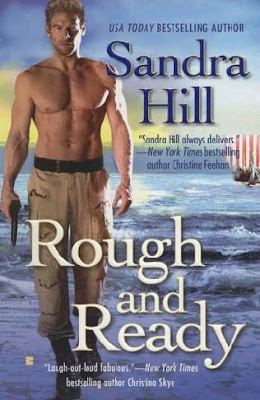 Here's the synopsis, which I reprint in its entirety because, as I've said before, you just can't make this shit up:

Lt. Torolf Magnusson and his team of Navy SEALs have gone back in time to eleventh-century Norselands on a search-and-destroy mission, but when they find they've landed in the middle of a sanctuary-filled with women-well, hoo-yah! Their plans are put on hold, much to the distress of Hilda, the head of the sanctuary. At first resistant to Torolf's pursuits, she soon succumbs to his passionate advances. But with victory in sight for Torolf, Hilda must face the fact that their love may not survive the test of time.

DocTurtle has just pointed out that I'm not so much snarking on the cover here as snarking on the book itself. Mea culpa. I was so distracted by the blurb on the back that I forgot to snark on the Navy SEAL who doesn't need a shirt, but does need a gun, with the miniature Viking ship in the background. And "fabulous" is a word I don't often associate with romance novels, at least not the hetero-normative romances written with mostly middle-aged women in mind.

I'm most intrigued by how both of the NEW YORK TIME BEST SELLING AUTHORS have almost the same name. I wonder if Sandra just looked at a list sorted by first name and arbitrarily chose both of them.

At first I thought that was Sandra with the gun - which made the "always delivers" thing kinda weird.

hetero-normative? That sounds like the fifth atomic state of matter. Solid, liquid, gas, plasma, hetero-normative. I think it's the point where superstring theory allows time travel, so it sort of dovetails back into the whole plot thing.

suggests that the review is from a reputable source, rather than a pseudonym.

What are these SEALs going back in time to "search and destroy"? Are they trying to make sure that Columbus gets his proper dues for discovering America by wiping out those pesky Vikings who'd been sailing up and down the coast of Newfoundland for centuries?

"Laugh out loud fabulous" sayeth the New York Times person. Going off that cover I think if she left the last word off it'd be more accurate.

Came over from Comics Curmudgeon and I'll definitely be back!

He's evolving into a giant block of sinew. Look at him. He is the future of Mankind.

I saw this here and then came across this very book in the extremely limited selection in the hospital gift store adjoined to my workplace.

Is it even possible to get through Ellis Island, let alone boot camp, with a surname like Magnusson? Looks like the 11th century nuns aren't the only anachronisms...

Who needs a shirt when you can walk on water?

I'm almost ashamed to admit that I know this, but Sandra Hill is her real name, and she's known for Viking romances, including time travel Viking romances.

Christine Feehan is known for Vampire or Paranormal romances, and is indeed one of the biggest names around. I'm pretty sure it's her real name too.

No idea about Christina Skye though!

What else is weird is book covers where the author's name is bigger than the title.

With some authors' names and book titles, you can't always tell the difference.

And nuns in the 11th century were not sworn to chastity!