So I was totally planning to add a note to the previous Longarm post about yet ANOTHER Western series that publishes every month and has over three hundred volumes called The Trailsman. But as I was looking for some cover art to add (the covers aren't very exciting, just kinda formulaic)... 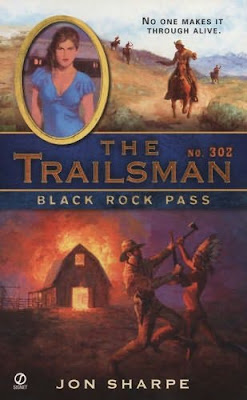 ...I discovered that Jon Sharpe was an alias. It's one of the many pseudonyms used by a guy named, as far as I can tell, David Robbins. (NOTE: It looks like Robbins only wrote #275 of the Trailsman, which means, I assume the Jon Sharpe is a whole host of people, and David Robbins is the only one who'll own up to having anything to do with it!) And lookee what David Robbins puts his real name on! 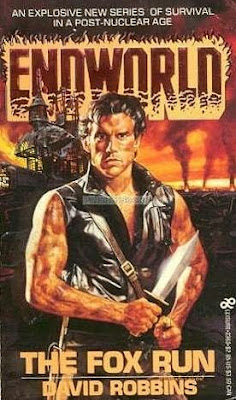 Yes! It's an "explosive new series of survival in a post-nuclear age"! I love this cover! It's sooo nice and hyper-masculine. The dirty, bruised guy is posed (nice little snarl there) with his GIANT knife just-so...It's sooo, soooo, well, PHALLIC!Don't believe me? Well, what about this one? 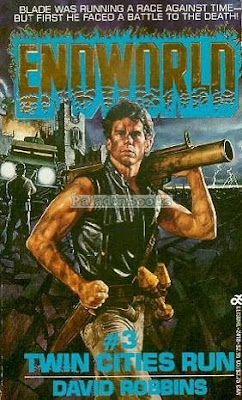 Here we have mortar rounds and a BAZOOKA! posed ever so alluringly. Seriously, who reads these?

Calling Tom of Finland! In answer to your question, "who reads these?": seriously disturbed Soldier of Fortune subscribers, while in the cozy confines of the outdoor "facilities" at their survivalist compound (on ranch land receiving Federal subsidies, of course) in BFN, Montana.

I find it interesting that the character in the second novel of the Endworld series goes by "Blade." Does this refer to his "weapon"? Does he have a friend named "Pikestaff"?

Keep it coming, this stuff rocks!

i found this link through the curmudgeons site and i think this stuff is hilarious... but i must point out that while the entire cover is absurd and masculine, he happens to have a butt plug on his utility belt for... you know when those evil terrorists come.

JUDD NELSON IS DEAN CAIN IN MAD MAX BEYOND LAMEDOME

Also I must point out that the series naming convention of "*Something* Run" is really dumb.

The spin-off (OH GOD THERE'S A SPIN OFF TO THIS SERIES), simply called "Blade" uses "Strike" as its repeated word, which is at least vaguely exciting.