When NOT to Judge a Book by its Cover

So I'm at work (subbing at a branch library, which is totally fun and cool since the patrons don't usually yell at me about their fines, nor do branch patrons tend to smell quite as bad as downtown patrons), and I get to talking to a patron about books. She seems to like some of the things I like, and I happened to be wandering by the paperbacks earlier and saw one of my favorite books, Kim Harrison's Dead Witch Walking. Which happens to look like this: 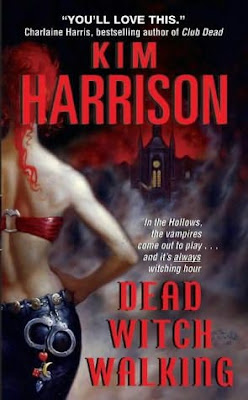 So I recommend it, and we go get it, and she says, "Oh, I saw that but the cover looked so cheesy!" AND SHE'S RIGHT!! This is a terrible cover! The hips are totally wrong and the neck is waaaaay too long and it looks like she has scoliosis and there's way too much writing on the cover and the hair is an unnatural shade, even for urban fantasy, and the smoke is just, well, cheesy! Contrast that with the fourth book in the series: 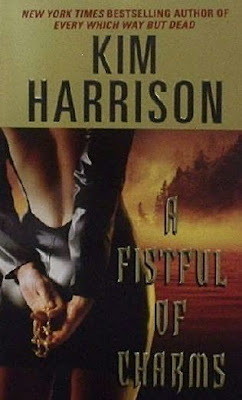 Now, which witch would you rather read?

I hope my patron likes the book!
Posted by Miss Maggie at 9:37 PM

Coincidence!! I had just Googled Kim Harrison this morning as my cousin recommended her books to me while we were on the phone last night. I took one look at that exact cover and thought, "I'm not reading that!"

Thanks for giving it the thumbs up because my cousin doesn't always have the greatest taste in books. I'll have to give it a try now.

I like the first one better because it reminds me of Heavy Metal (the magazine) style art. The second one just looks 'shopped.

These are really good books. I'm not really bothered by the Dead Witch Walking cover. Fantasy covers can be so bad that, in comparison, this is flat out gorgeous. But the arcane red hair and skinny, too-long neck are annoying. And the brass knuckles are a lot better than the handcuffs, lol. Says kicks butt rather than S&M, anyone?

If you like Kim Harrison, you might check out some of Luna Press's books. Michelle Sagara has a great series starting with Cast in Shadow.

Plus I am REALLY trying to figure out what that top looks like in the front. There appears to be no neck strap, and that circly thing is not a clasp... so, it's a clasp-front red leather bandeau?

Her boobs must be squished into her armpits! How un-vampiriffic.

On the first one, did you notice the ketchup-red hair, the skanky little top, and what seems to be hand-cuffs coming out of her pants? She kinda brings Britney Spears to mind. "Dead Witch Walking"? What is she, a zombie?