Howdy, and Merry Christmas to those of you who celebrate this particular solstice holiday!

I thought I'd get on-line this morning and put together a special Christmas Edition of JaBBiC, including elements both sacred and secular, but in any case nutty as hell: bad (or simply wacky) book cover art respects no religion more than any other, and it wasn't hard to find a few gems. I have to admit that in a couple of these cases, the titles are funnier than the covers.

Let's start off with a children's book whose double-entendre title suggests the book's theme:

I don't suppose the task demanded of us will be that hard if on every page, as on the cover here, there's a shaft of heavenly light pointing the way to our hidden friend. Too many Galileans crowding around him here to tell if he's pulling his walking-on-water schtick here, but he does appear a foot taller than anyone else around. Not to mention pale as a ghost; Werner Sallman's Jesus looks downright swarthy by comparison. In fact, this is the whitest bunch of Palestinians I've ever seen.

Incidentally, the other books in the series are Can you find Bible heroes? and Can you find followers of Jesus? (no, I'm not kidding).

So then, turning to the secular side of Christmas: 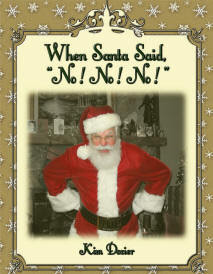 Ah, the joys of self-publishing!

I have no idea what the deal is with this book aside from the fact that its author is a graphic designer from Alabama who seems to have some kind of a sweetheart deal with Santa Bruce, RBS (Real Bearded Santa...I wonder if you have to go to school for that degree? Bruce does indeed claim on his website to have a degree from the International University of Santa Claus, but there's no scan of his diploma, so on that point we'll have to take his word), an Atlanta-area professional Santa Claus.

Regarding the cover, though: Santa appears to be in need of some high-fiber muesli. I'd hate to be the naughty child whose home he's visiting in that cover image. Keep those hands where we can see 'em, Santa.

Next, we've got a book whose cover is pleasant enough, but which book itself we can file under 'T' for "They really wrote that?!": 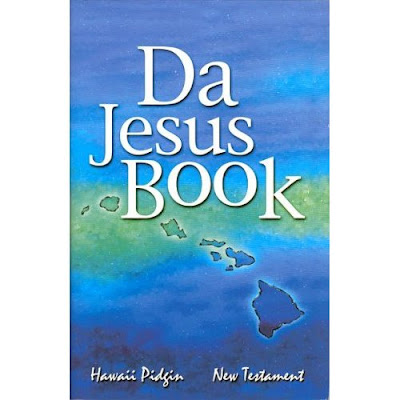 Apparently Wycliffe Bible translators secured the work of linguist Joseph Grimes, who toiled for 12 years to put together this translation of the New Testament into Hawai'i Pidgin. Need a reason? Check out the Pidgin Bible's homepage to learn more about the effort, and to read excerpts from the translation.

And, going from the odd to the merely creepy, I'll close with the back cover of Santa's secret: a story of hope, the real story of Secret Santa USA: 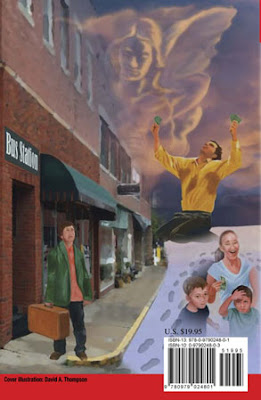 "...He fell to his knees and shouted jubilantly, 'yes! I finally have the cash to buy this book!'..."

Meanwhile, the man with the suitcase is chagrined that the outsized angel has once again managed to track him down. He thought he'd lost him outside of Poughkeepsie.

Happy Holidays, one and all, whether your holiday came a few days back (Winter Solstice or Hanukkah) or has yet to begin (Kwanzaa), or whether you're smack dab in the middle of it now (Christmas).
Posted by DocTurtle at 8:39 AM

Thank you doc turtle, for picking up the slack. It is so cool to see postings almost every day. Every time I check out Comic Curmudgeon, I also check, Judge a book, in the vain hope that it will have a new entry. :)

See I'm not the only one who wants to see a post every day, so there. Maughtamom

Let me just say that I showed the cover of the "Who Can Find Jesus" book to my kids (ages 12 and 7). They both pointed out the beam of light. Nice! So much for reaching your target audience! :o)

Am I the only one who found the angel thing on the last one to be creepy?

The guy next to Jesus in the river looks naked. Maybe that would be a more fun game.

Thanks for the link to Da Jesus Book, which easily pegs out on the Unintentional Comedy meter. I am going to hell for mocking it, but you can't make stuff like that up.

Professor Grimes taught the course I took in phonology in the 1970s. He was a very nice guy, and patient with someone who wasn't a very good student. Even then he was affiliated with the Summer Institute of Linguistics, although my recollection is that much of his work at that time centered on Huichol.
Say what you want about Bible translations (or the covers thereof), but bear in mind the people involved in missionary work and its support have done a lot to preserve languages that are dying out or have died out, no thanks to Americans who don't care about anything but English.
I don't believe people who aren't from the U.S. should be treated like heathens, but there's not much other non-religious support for the documentation of minor languages around the globe.

When it comes to judgeing a book by its cover The Bellini Card, the third in the best selling Yashim series by Jason Goodwin, must surely be a winner.

You can find out more about the award winning Yashim the Eunuch series at www.jasongoodwin.net.

The third book, The Bellini Card, will be out this summer, you can visit its blog .

My apologies - the comment above was left by my children, who are understandably eager to spread the word. I only lumber in here to point out that too much computer use leads to quick reactions and bad spelling.

I just found this site because I'm sitting in a meeting where Chuck Grimes is one of the main speakers. I was already familiar with "Da Jesus Book" and had read a few excerpts from it but decided to read a bit more about it on the web. I don't quite understand how it earned a place on this site. I think the cover is entirely attractive. Since the speakers of this language originate in Hawaii, it makes sense to have a picture of the islands. I can only guess that the complaint must be the title itself. I guess if you think of this as a "substandard" variety of English and interpret the name through an ethnocentric lens ("How could you name the Bible something in your language that sounds funny in my language?"), then I guess it's funny. But before you throw stones, remember that English (like all languages) itself is a "creole" and some people view the American variety as "substandard." There are some British English speakers that find American English funny at times as well. So get over it!
I don't think Wycliffe views people from other countries as heathens. One's faith, not one's national origin, determines that. A great many Christians all over the world appreciate the service of Wycliffe Bible Translators in helping them get access to the Bible in a language that speaks to their hearts.