Hey there, ladies and germs! [squeezes horn attached to belt] Anybody out there? Is this thing on? [taps mike] Seriously, folks! I came here to be funny! Uh...yeah...

So Maughta's feeling under the weather and hasn't had a chance to update this site for a while, so to stave off the tar and pitchforks and the unending flow of bad book covers she's sent me (DocTurtle, a.k.a. TurtleBoy) to the gates to deal with y'all.
You've helped out by providing a good deal of material to work with. In addition to the lists of illy-illustrated books she's got scattered all over the place (her corner's a bibliographer's nightmare) and the mental list I've been mining for a while now ("Do this one, Maughta, this one!") your submissions give enough fodder for five or six healthy posts. I'll go ahead and start with a few gems from the inbox. For our first course, we have faithful reader Feral Boy to thank: This looks like a Senor Wences skit gone very, very awry, a sort of Hieronymous Bosch meets The Muppet Show. I'm actually cheating here, drawing from the inside of the book, since the cover isn't nearly as bad, as pointed out by Feral Boy: 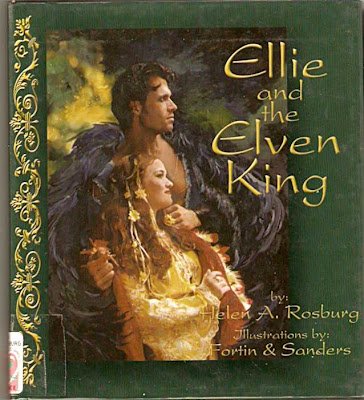 At least we know that John Stamos landed on his feet after Full House was cancelled. I like the fact that the illustrators were too ashamed to have their full names included on the front cover.
Yes, the above both come from Helen A. Rosburg's Elsie and the Elven King, which, if I'm understanding things correctly, is kind of like a Tolkienesque rewrite of the Kama Sutra. Elf sex, anyone? Regular comics readers might be getting a Brooke McEldowney vibe right now. Maughta checked this book out and had it lying around for a few days (though not prominently, lest the neighbors get ideas). Scary stuff.
Moving on, we find this beauty, courtesy of faithful reader Ryan: 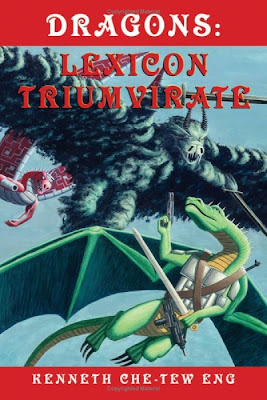 What's not to like about this cover? It's got dragons engaged in in-flight swordplay, carrying laser cannons and semiautomatic pistols...I thought that dragons were fearsome for powers that inhered in their being, like fire-breathing and whatnot? Wouldn't a dragon catch hell from his dragon buddies if he started packing a sidearm? Just sayin'.
I dunno. The whole scene reminds me of an unfortunate Japanese import I would've seen back in 1980 on TBS if I'd turned the TV on on Saturday morning waaaaaaaay before the good cartoons came on. I think the cover artist here was going after his own demographic, to wit, fantasy-addled fifteen-year-old boys. (Note to fantasy-addled fifteen-year-old-boys: please don't sue. We don't have much money.)
Blam...er...thank Erin for our next course. The titles say it all: 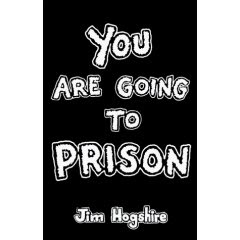 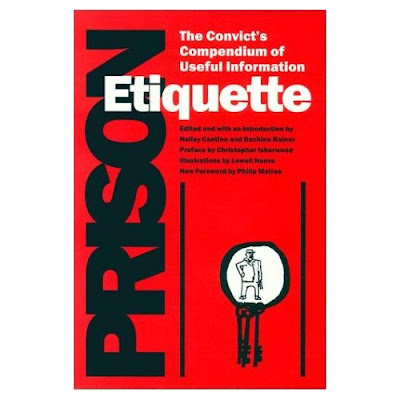 I guess there is a niche to be filled here, and a captive audience [rimshot]. The cold, hard simplicity of that first title is just marvelous, poignantly coupled with the brutal black cover design. Bravo! I have to admit being intrigued by the second book. As advertized, I'm sure there's a treasure trove of useful information on any number of topics, from drug smuggling (what percentage should you tip the crooked cell block commander?) to romantic encounters (is the laundry room a good place for a first date?).
On a more serious note, if you do a little digging you find that this text was written in 1951 by a number of pretty well-known authors (such as Robert Lowell, William Everson, and William Stafford) who were imprisoned as conscientious objectors during the first half of the century.
Socially responsible snarking here, folks.
Damn, that killed the high, didn't it? Um... 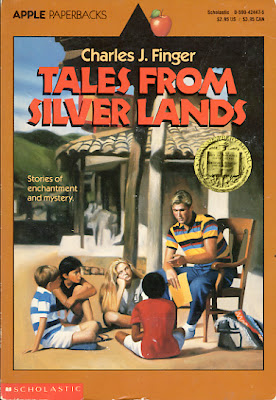 ...And we're back! Anna sends us this wonderfully-airbrushed 1925 Newberry Award winner by Charles J. "Pull My" Finger, chocked full of "stories of enchantment and mystery." I'm sure the stories are indeed enchanting (Anna calls them "quite good"), but you wouldn't know it from the look of the kids on the cover. They were so busy being enchanted that they didn't notice their transportation to the Silver Lands. Where exactly are those? I'm voting on fin-de-siecle Rhodesia. Colonial brutality, internecine warfare, oh the enchantment!

Meanwhile, girlfriend there looks positively enraptured by Saved by the Bell's Zack Morris. He's just spewing forth those hilarious hijinx with Screech and the gang, like the time when they all got together and sawed each other's arms off, replacing them with mannequins' limbs? Good times, good times.

On that note, I'll end my first guest posting. Maughta's on me to tag-team with her more in the future, so you might see more of me, for which I apologize in advance. Until next time, happy snarking!

Posted by DocTurtle at 3:33 PM

YES GO TO HELL you land on your feet!!!

Wow, I leave DocTurtle alone for one post and he gets hecklers. Lets all be nice, now. :)

Kenneth Eng is the guy who wrote for the Asian-American newspaper until he called all black people stupid. So you know you're getting a quality literary product there.

My mother always told me that when you send anonymous letters, it was before the internet, that what you have to say is probably derogatory. Boy, was she right. So there!

Thanks, maughtamom! Now everyone in the world knows that my weirdness is hereditary. Not that anyone who knows the both of us thought otherwise...

Thanks DocTurtle for filling in. I kept checking on Mammary Monday and Whatever-penis-Friday was called, hoping the blog would be updated, so glad that you have brought it back.

Just deleat those top two comments. What an a**. Plus, he or she had to go through the CAPTCHA to post too. Blech.

Wow, DocTurtle appears to have inspired a bunch of fan mail. Captured audiences, perhaps? "Tales from the Silver Lands" looks like a total snoozer. Mr. Fratboy storyteller's superpower appears to be the ability to bore young adult members of any ethnic group.

If you want another really awful Newbery winner cover, check out this (undated) one of the 1924 winner, The Dark Frigate (scroll down past the review - I put it near the bottom, so as not to discourage anyone from reading it.

Oh hell, I screwed up the first link. Here it is again: Covers for Tales from Silver Lands

Maughta and DocTurtle, I didn't know I was weird. I know you only inherited really good things from me. Doc, you got it by osmosis.

Well, you'd leave angry, anonymous comments on blogs too if you were an embittered illustrator forced to ruin a perfectly good battlin' dragons cover with the increasingly dorky modifications demanded by the addled author in a series of sweaty midnight phone calls: "An', an' so, I got this idea for the cover, so, see, my dragon should be be wearin' some bad-ass ARMOR an' then he has this BIG SWORD but also a GUN an' he's like lookin' over his shoulder at the other lame dragon, all YOU'RE SO LAME WHERE'S YOUR SWORD AN' KICKASS GUN YEAH NOWHERE THAT'S WHAT I THOUGHT."

Okay THAT I can deal with, but then you bring in Zach Morris (and, holy crap, it really does look like him!) boring a group of children. My brain just exploded.

Ah, Judge a Book, you were missed. It's nice to have you back. Good job, DocTurtle. Get well soon Maughta.

Maughta, get better, although I don't mean to imply anything about DocTurtle's skills there. It's nice to see you back in town, so to speak.

I did see one cover on the paperback stand of my local CVS. I can't remember the author or the title (except it simply a first name) featuring a man who wasn't a cowboy (since he had no cowboy hat) riding a very bucking bronco with no saddle, either. Having a hard time of it, as you might expect, and was demonstrated by his shirt which was flapping, unbuttoned and untucked, as no real bronco buster would. I suppose the cover artist was desperate to get a bit of beefcake in. But I immediately saw the appropriate title--the bareheaded barechested bareback bucking bronco buster.

OH good gravy, I have that Elven Sex book. I think it wandered into my stuff at a convention we attended. I've got it hidden. I have an awful suspicion I might know someone associated with it, too. I may have to bury it at midnight under a dark moon or something. Plausible deniability, or something.

As for the Tales from the Silver Lands, I have a very old copy of that one, very ordinary white with some sketchy looking drawing of what I think was a man and a mule. It's in a box, so I can't find it right now. But, yes, that cover belies the really good contents.

What is up with those anon comments? The mind boggles.

I had to laugh when I saw that first title, because I have this unpublished novel entitled "Ellie & The Vampire." Perhaps I should get some tawdry artwork to grace the cover and within...

I'm a bit late to the party, but there's so much more to say about the Dragon's Triumvirate. I first ran across the author when he wrote "Why I hate Blacks" in his column in the AsianWeek newspaper. Since then, he's claimed his writing inspired the Virginia Tech shooting, and wished he'd done the same at his college. This guy is obviously suffering some severe mental problems, see his wikipedia entry for more details.

But you could probably diagnose him based purely on that cover.

That first image looks like it could be a scene from a Mel Brooks movie. Especially since the woman is a dead ringer for Madeline Kahn.

As for Eng... I think I've found just the webcomic for him: http://www.safcomic.com/