OK, so it's Sultry Monday. I was away for the weekend, during which I made a new purchase. It ties in nicely with the last post, re: how (not) to use babies on book covers. Enjoy.

So I had an early 70s movie tie-in of Chester Himes' "Cotton Comes to Harlem" all cued up and ready to go as my 200th Paperback ... and then I went to Plattsburgh. 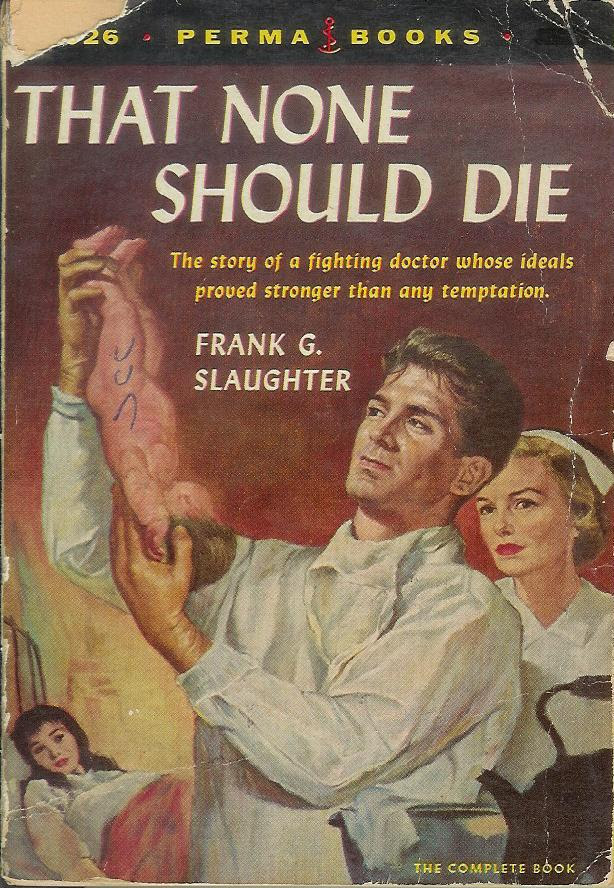 
a. preparing to shoot the newborn at the ceiling like a rubberband
b. preparing to make "newborn tea"
c. deciding whether to keep it or throw it back
d. looking Way too long and hard at the baby's genital region, or
e. so handsome that nobody cares what he's actually doing "I shouldn't be saying this, I suppose, but you look like a better class of man than we usually get in a job like this, and I hope you're going to stay with us."

He added, "I mean, I'm not gay or anything, but dear god you're handsome."

that baby is a very hairy newborn.

Does he get the nurse or the mother of the sexless baby?

Crowscious,
It definitely looks like he is eyeing the mother. Do we know who this baby's father is?

So THAT'S how you turn a trick. And all this time I thought...well, nevermind...

The nurse looks a lil like she wants him too. I hope it's a happy ending anyway.

... and all babies are born blue. Gotta love it when manly medico-gods think they invented the switch from the fetal circulation to the born-human circulation.

I'm so glad the cover confirms that this is the complete book! I was worried I might just get the "intern to super-doctor" part.

I heard a rumour that there was a time when just having the word 'doctor' in your title guaranteed higher book sales. I think 'nurse' had a slightly less pronounced effect

Medicine in the USA already HAS been taken out of the hands of doctors and given over to "politicians, bureaucrats, and quacks", i.e., HMOs, Big Pharma, and industry lobbyists. And it all happened with the privatized medicine you have now.

Re your point d), the good news is that "'his ideals prove stronger than any temptation"'.

would the cover for 'ski resort nurse' be too obvious for this site?

Am I the only one who finds the relation between the title and the author's surname... incredibly hilarious?

Yeah, that was one of the first things I noticed..interesting choice of pseudonym, very interesting indeed.