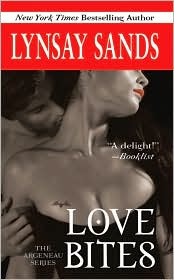 This cover makes me very uncomfortable. Why, you ask? Is it because the handsome vampire (apparently the hero of the series) is about to bite this woman on the neck? No. That's standard vampire fare. Is it because the only touch of color is the blood-red (well, more like coral-orange) on her lips? No, though I can't figure out why her lips are red rather than his. Is it because she apparently thought tattooing a bat on her boob was a good idea? Absolutely ouch, but no, that's not it either.

This cover makes me flash back to those hot summer days when, as kids, we would all play with water balloons. Remember that? Epic battles in the streets of your neighborhood? (When I did it, it was before the Super Soaker could take out a whole team in one fell swoop, and before hitting someone with a balloon was a lawsuit-in-the-making.) Remember how, occasionally, you were preparing to whip a balloon at your friend, but you'd grab it too tight? It would strain, strain, strain, and then burst all over you. That's what this cover reminds me of. Maybe her dress is too tight, but I think it's more likely that she has too much silicone in those implants. They look dangerously overinflated!! Any second now, our hero will be saturated, not with blood, but with saline. Yikes!
Posted by BikerPuppy at 11:34 AM

I think we're dangerously close to seeing nipple in this pic. Eek.

It's the dot in the middle of the "O" that bugs me. Why is that there?!? What crazy font designer decided that was a good idea?!? And why, o why, do they use that font for every. damn. urban. fantasy?!?

It's not only the font, the woman is looking incredibly bored. Perhaps she used to live in Sunnydale?
"Sigh, another freak on PCP nibbling on my neck... I'll just ignore him until he gives up."

"too much silicone in those implants" -- you speak madness, madness, I say...

There is also something weird with that bone next to her neck, I think?