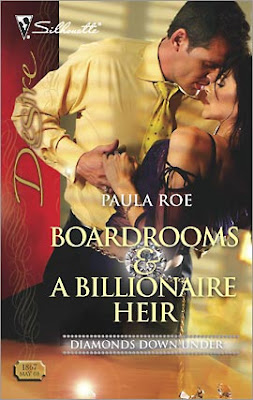 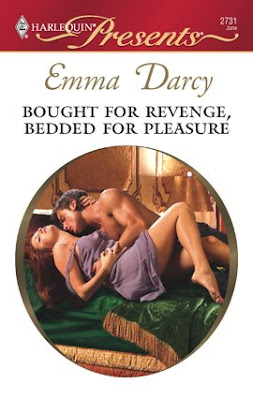 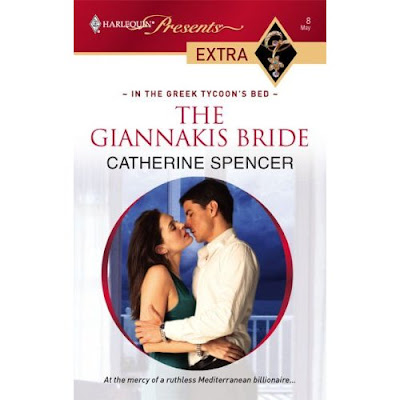 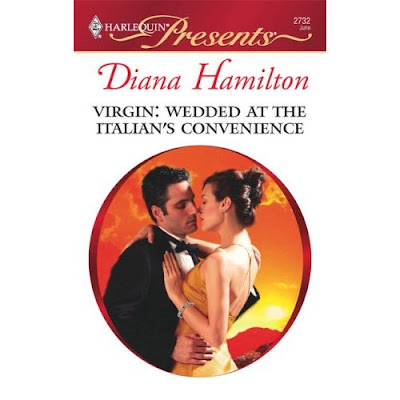 Until next time, keep sending us your covers, and your favorite pulp titles!
Posted by DocTurtle at 9:26 PM

As if everything else were not enough, "Bought for Revenge..." is allegedly penned by somebody who sounds like a wannabee Jane Austen character...

Man, I think I'd rather be "bought for revenge" than "wedded for the Italian's convenience." The latter sounds so passionless. "Oh, can you do on the 5th? That really works best for my schedule."

Call me crazy, but I actually want to track down and read "Virgin: Wedded at the Italian's Convenience", now... Sounds like a laugh riot!

The Giannakis Bride cover scene is not at all romantic. Unless you're into moms seducing their sons, that is.

"Virgin: Wedded at the Italian's Convenience"

what?!?! the marriage was at a public lavatory in Naples?!?!

I'm intrigued by the first book's promise of "Diamonds Down Under." That sounds like a new, kinky (not to mention expensive) twist on your average romance novel plot.

I saw a rack of Harlequins at the bookstore the other day, and "Virgin..." was the one that jumped out and poked me in the eye too. The phrasing is so awkward, plus "convenience" is, as Josh says, so ho-hum. Not "desire" or "command" or anything, but "convenience." Extremely laugh-worthy.

Dude! You gotta do better than Harlequin/Mills and Boon/Silhouette covers. I mean it would be wrong of them to NOT be dodgy and cheap!

Find something that's meant to be taken seriously to laugh at, that's WAY funnier!

The woman on the first cover looks like that puppet Madam. I read the book and I have to say the lead characters were all too stupid to live. And no, there were no kinky sparklies down under.

Ooh, thanks Katiem. I'd buy The Puppet Madam. Quick, someone write it.

Am I the only one who thinks those last 3 covers look like Campbell's Soup labels? o.O

Is that humongo diamond on the first cover attached to the woman's belly chain?

I'm trying to use Thesaurus Power to come up with a better title for the last book, but finding I have to leave something out or it just gets too wordy.

How about "The Neapolitan Nuptial of the Naif"?

"Boardrooms & a Billionaire Heir" was a prototype role-playing game that the late Gary Gygax was working on before he came up with the ultimately much more successful "Dungeons and Dragons" concept.

these titles are for the barely literate, people who can't know that titles should be clever. they might as well title the books, "Between These Covers is Humpin' a Plenty" or "Folks Richer than You are Ready to Screw on Clean Pet-free Beds."

they should make a Mad Libs for romance novels:
"My (place of business) provides this private (mode of transportation). Now that we are alone, let me undo those buttons on your (brand name) (article of clothing). Here, feel how my (body part) (verb)s with you close. I can (verb) the (adjective) of your (body part, just not "hooters," okay?)."

So it would become:
"My (medical device company) provides this private (golf cart). Now that we are alone, let me undo those buttons on your (Gucci) (shoes). Here, feel how my (ear) (wiggles)s with you close. I can (caress) the (pink) of your (hair)."

I would buy that "Humpin' Aplenty" novel.

I am reading the Pandora Prescription by James Sheridan and I was curious if you have ever read it? Also, have you heard about this?

Has anyone bothered to mention that these book covers all look like Campbell Soup cans ???

Ow! "Diamonds down under" sounds painful. For all parties concerned.

A Kitten in a Brandy Glass said...

I just can't get my head around the last one, it's so fabulously longwinded. Perhaps there's a word missing at the end: "Virgin: Wedded At The Italian's Convenience Store"?

They used to have a stand with mills and boon books on in the post office. It really helped to pass the time when waiting in the long queue - to read the hilarious titles and just trying to imagine what the stories might be about!

I am fairly certain that there is a room at Harlequin with a huge dart wheel, with words on it like, "Tycoon" and "Bedded" and "Mistress," and they just spin it and throw darts blindly to come up with those titles.

Does this call for more title exposition?!

Of course, one must not ignore the Bard's classics:

Fairies Screw With Some Lovers But It's All OK

Lovers Get Angry, Guy Pretends He's Dead, Dogberry is Awesome, It's All OK

Blame It On The Jews (In Italy!)

I Married Almanzo And We Wrote Books by Laura

I Am Gay And Also Funny by David Sedaris

Ha! I have just discovered your blog, and have been rolling with laughter. Thank you. And I will be reading you often from now on :)

As a matter of fact, I've just finished translating one of Emma Darcy's novels for Harlequin :) It's called "The Playboy Boss's Chosen Bride" and is rather painful to read, not to mention render into another language. It was reassuring to see other people get a laugh at "Ms. Darcy" (seriously, I wonder who it is that writes these books. Underpaid immigrants? A machine?), or at least the cover of her novel...

It makes me sad to see these kinds of crap books representing the entire romance genre to the majority of people. it's just embarassing.

Is it just me, or does the billionaire on the first cover look like he's sucking on her nose?