Hey, kids! How's shakes? Maughta's been draggin' her heels long enough I thought I'd step in and get rid of those goldarned rabbits. What's say we beat up on Baen some more, huh? Like shootin' fish in a barrel...

Behold, The Death of Sleep: 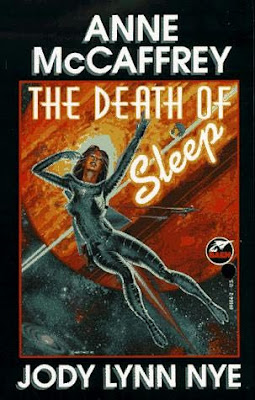 What's not for bepimpled and undersexed fifteen-year-old boys to love about this classic Baen cover? A barely-clad bimbo in an impractically skin-tight spacesuit jetpacks provocatively in front of a Jovian planet, no doubt rocketing off to an extraterrestrial adventure that will require her to shed said impractical spacesuit and wander about some cold uncharted planetscape buck naked. Our heroine is so busy demonstrating the effects of zero gravity on breast orientation (one went east, one went west...) that she forgot to put her helmet on before leaving Europa.

Which might be why she looks so tired. I hope she doesn't get sucked into the eddy in the spacetime continuum that just popped up in the lower left.

Meanwhile, back on Earth... 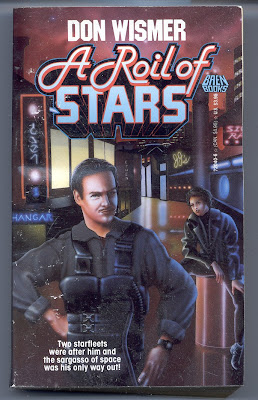 With Baen around, it's all too easy.

This cover reminds me of Bladerunner, except Bladerunner doesn't suck. [Disclaimer: no, I have not read this book. In order to stave off angry letters from Wismer worshippers, I'll add that I'm sure the book is one of the greatest works of fiction crafted in the 20th century and I'm not worthy to clean the dog doo off of Don Wismer's riding boots. I must admit that with a metaphor as weak as "the sargasso of space" on the cover, I'm hardly tempted to read further. Besides, might I remind the gentle reader that the point of this blog is to destroy crappy covers?]

This cover looks like it was put together by Tom of Finland (NSFW link here), only its falls short of the requisite number of bulging penises. We do have a nice pornstache, though. I suppose this is what Clark Gable would have looked like if he'd lived long enough to play a private dick in a cyberpunk adventure, complete with black-trenchcoated femmes fatales and pseudo-Japanese neon signage.

Well, snark away, loyal minions! I hope this post will hold you off for a little while as I try to prod Maughta into giving you some more goods real soon-like.

Posted by DocTurtle at 8:47 PM

1) Her legs are also being spread apart in the same way as her breasts. Perhaps she's between the poles of some strange gravity machine. Or perhaps she's being shagged by the Invisible Man.
2) That's actually a galaxy down there. I suppose one could term it an eddy in the space time continuum, but technically, EVERYTHING is an eddy in the space time continuum.
3) The guy on the second cover doesn't remind me of Tom of Finland. To me he looks like a baseball umpire who got lost on the promenade of a Carnival cruise ship.

...She's got cloven feet on the first cover.

Thank you TurtleBoy, for putting up a new page. Perhaps you should tag team more often.

Oh my. These are incredibly bad. Miss astronaut really could use a backbone. And Mr. pornstache's corset is on crooked.

Wow. That's a woman in background of the second cover? I thought it was a dude.

Thanks Doc for taking over for Maughta so that I can continue my morning ritual of reading the newest blog. You would hate to leave me in a void of nothingness. As you know, I was sick of rabbits.

If I were a bepimpled and undersexed teenage boy, I'd probably be a little afraid of the laserbeam shooting from that woman's crotch.

It's more real than anyone thought:
http://j-walkblog.com/index.php?/weblog/posts/space_suit_fashion/

I was thinking more a young Burt Reynolds with too much hair gel.

The Death of Sleep was actually a really good book.

That's a horrible cover, it's not even relevant to the plot!