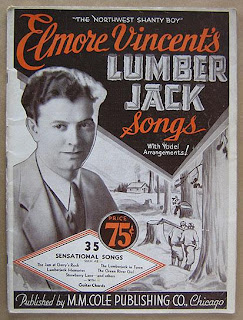 Imagine, you are getting ready for your romantic evening; you've cleaned the house, dinner is in the oven, the wine is breathing (or whatever wine does when you uncork it and leave it to its own devices), you've got on your sexiest dress and highest heels, and Mr. Perfect should be here any second. How do you set the mood? Lumberjack songs!!! Put that baby on the spindle and get ready for more fun than is allowed in 12 states!!
Posted by BikerPuppy at 10:55 AM

I can just hear all the young girls screaming, "It's Elmore Vincent -- THE Northwest Shanty Boy! AHH!"

I was totally unaware there were other lumberjack songs aside from the obligatory Monty Python one.