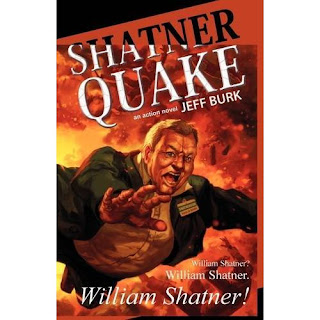 I'm not sure if they hired a third rate cover artist or if this is intentionally not supposed to look like William Shatner -- Shatner's "appearance" in Season One of Family Guy looked more like him than this! -- but that's supposed to be everyone's favorite overacting starship captain. From Amazon:

It's Shatner VS Shatners! William Shatner? William Shatner. WILLIAM SHATNER!!! It's the first ShatnerCon with William Shatner as the guest of honor! But after a failed terrorist attack by Campbellians, a crazy terrorist cult that worships Bruce Campbell, all of the characters ever played by William Shatner are suddenly sucked into our world. Their mission: hunt down and destroy the real William Shatner. Featuring: Captain Kirk, TJ Hooker, Denny Crane, Rescue 911 Shatner, Singer Shatner, Shakespearean Shatner, Twilight Zone Shatner, Cartoon Kirk, Esperanto Shatner, Priceline Shatner, SNL Shatner, and - of course - William Shatner! No costumed con-goer will be spared in their wave of destruction, no redshirt will make it out alive, and not even the Klingons will be able to stand up to a deranged Captain Kirk with a lightsaber. But these Shatner-clones are about to learn a hard lesson...that the real William Shatner doesn't take crap from anybody. Not even himself. It's Shatnertastic!
Posted by BikerPuppy at 10:43 AM

Yes, the cover is horrible. However I find it weirder that Bruce Campbell's fans would have something against Shatner seeing how Bruce is a Star Trek fan! In fact, in his book Make Love! The Bruce Campbell Way there's a scene where Bruce finds the old Enterprise props. I would think Bruce would LOVE to work with Shatner.

No, it would make much more sense if these people worshiped Star Wars, Firefly, or Doctor Who.

And by Twilight Zone Shatner do they mean the "there's something on the wing" Shatner or the "superstitious and obsessed with a fortune telling machine in a diner" Shatner, or both?

Don't forget the Babylon 5 cult. If it still exists, I consider myself a near-convert - I'm not rabid enough to be a true convert, but I've been known to get into arguments with Star Trek fans about the merits of B5 verus Star Trek.

I'm wouldn't have thought Bruce Campbell fans, either... No matter how you look at it, though, that cover artist is terrible. It's like graphic novels based on TV shows, where the characters only look like the people they're supposed to look like if you squint.

Am I more terrified that this exists? Or that part of me almost wants to read it? AAAAAAAHHHHH!!!

Depending on how he is doing with is diet that does look like William Shatner.

How old does it make me that when I saw Campbellite I thought of John W. Campbell?

Just for the record, ShatnerQuake was a wild, crazy fun ride. Bizarro for the win!