The Phuture is Phallic!

Happy New Year, Judge a Book readers (at least those who use the Gregorian Calendar!). From Shushie:

This book isn't awful, just outdated now at 30 years old. It was briefly mentioned this morning on CBS's Sunday Morning show as part of a 30 year retrospective comparing technology then and now, but of course I had to check and I was certainly surprised to see how several public libraries still hold this title as part of their collection -- hopefully in a special section for discussion or nostalgic purposes only considering that in history according to this book:
- Between 1980 and 1990 household computers cooked our meals and kept a diary for the people living in the house; the first domestic robots were used as household "slaves" to do simple tasks; energy saving features were built into all new houses; and the world tree planting programme had begun.
- Between 1991 and 2000 the household computer now ran the robot slaves to do most work formerly done by the human housewife so that women could go to work or spend their time on leisure activities; we all started talking on wrist-radios; and the USSR launched its "cosmic greenhouse" as part of its space station complex which helped further the design of future space cities.

Yeah, but all I see are phalluses! 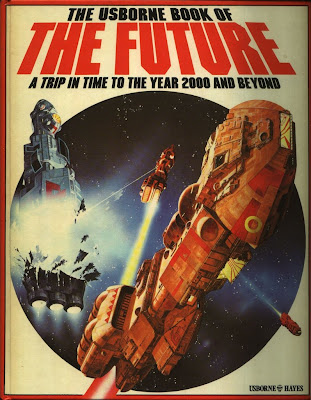 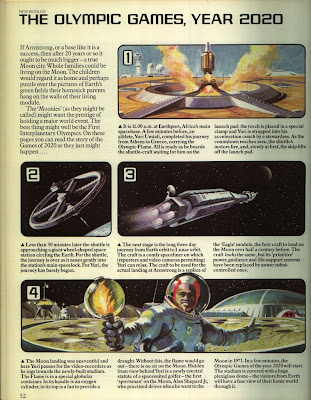 Penis in Spaaaaaaaaaaace!
Posted by Miss Maggie at 10:08 PM

I smiled all through this post, but I lost it at the last line. Thanks for brightening my day!

When I was a kid I was obsessed with these life in the future sort of books, and always borrowed them from the library. I see now that I was being brainwashed with phallic images the whole time.

I guess it's because phalluses make the best rocket ships?

Is it just me, or does the torchbearer look like Shaq? Also, how great would it be to see Shaq on the moon?

Aside from the phalluses (thanks for ruining the imagery!!), this is the most awesomest book ever!! I love these things!

Let's check this book 10 years from now and see if the Olympics are really like that!

Shaq on the moon!
That's great!

That's what's wrong with the space program, really: The Saturn V was as phallic as phallic can be, just daring any other country to try and compare to us. The Space Shuttle, with that huge cargo bay door is really entirely too yonical for an aggressive space program. It's far too interested in being sensitive, supportive, and understanding, and really what kind of fun is that?

Anyway, I love these "Days of future past" kinds of books. I've always been fascinated by their inevitably utopian World-Wide World's Fair version of life. I also love how it's Nooooooot toooooo far in the future, but just far enough that you'll likely forget about it by the time 'the future' gets here

I loved that book growing up!