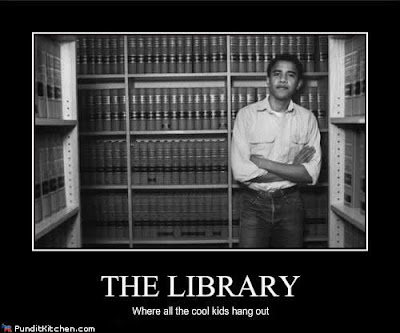 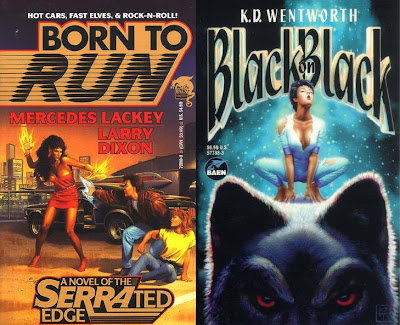 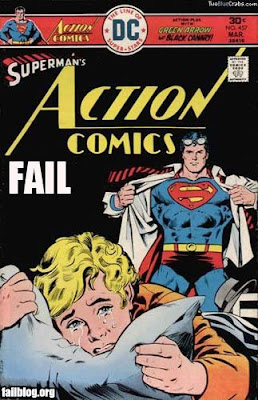 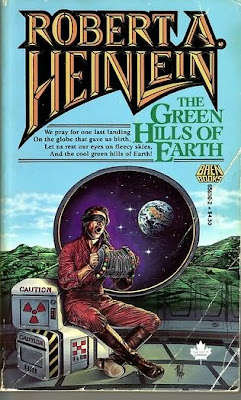 If you like the Superman cover then you must check out SuperDickery.com, dedicated to providing overwhelming evidence supporting the proposition that Superman is a dick.

Yeah, several of Heinlein's books not only present incest as perfectly normal, he seems to claim that sex with a cloned version of yourself, either as a man, a woman, or a teenage version of either, is why the FUTURE IS AWESOME. That all his protagonists are idealized versions of himself (even when writing as women), makes Heinlein everyone's favorite libertarian pervert uncle.

Anyway, the guy on the Heinlein cover is Rhysling, the bard of the spaceways. That isn't a blindfold he's wearing. He has tied a cloth around his head to cover his ruined eyes (burned out in a nuclear engine accident). Plus he's singing, so what sort of expression do you expect? And that isn't an accordion, it's a concertina. It's light and can be stored in a relatively small space, which is important for space travel. Finally, I can't quite make out the author's signature, but the composition and the fact that it's a Baen apparently from the 80s suggest Darryl K. Sweet and he can't draw people to save his life.

oh, come on, in Action Comics #457, the kid is dying... who would remove the dialog balloons to change the scene like that... that's just.... funny.

Nothing excuses the twaddle that passes as a lyric on the cover, even if you could excuse the rest.

I'm embarrassed to say that I went through a Mercedes Lackey fangirl phase in high school, but even in the middle of it I thought the biker elves series was silly.

Btw Black Black is also the name of a brand of Japanese candy IIRC.

I was going to enlighten you about just how sexually interesting Heinlein is, but I see I've been beaten to it. All that remains is to specify that it's *consensual father/daughter incest* that he is especially fascinated with. (This tends not to come up in his juveniles, which may be why those tend to be more popular than his adult novels.)

I, too, had a Mercedes Lackey phase as a tween/teen--the books aren't quite as bad as the covers suggest. She does tend to mine the same territory (child is unappreciated by family, but it's OK because s/he has Special Powers and will be accepted by other people with Special Powers) over and over, which accounts simultaneously for both her popularity with that age group and the frequency with which her readers outgrow her.

ashamed to admit i know who amy winehouse is said...

I see others have already beaten me to the punch on Heinlein as "Sexually boring". The man was a straight-out freak. He warped my childhood beyond redemption. I definitely recommend him to anyone who thinks the modern novel is too weird or kinky; modern novels have NOTHING on this man. (I still love his books. I know there's something wrong with me.)

The one thing I'll never forget about dear Heinlein when I read the first, and last, book of his I ever read-
His character went back in time in order to have sex with his mother,
And sometime along the way had sex with his twin daughters/gender swapped clones.

I now make EVERYONE read it.