History for Heyer: Chapters 1 -- 3 of Georgette Heyer's An infamous army

Well, folks, it’s time I moved onto the second book on my SBTB-assigned reading list, Georgette Heyer’s classic historical romance novel An infamous army, described by the cover as “a novel of love, war, Wellington, and Waterloo”: 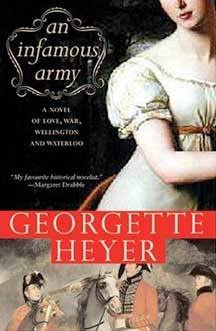 To the contrary, I don’t feel bested or beaten, and I’m heading into this new assignment with alacrity: it should be more up my alley than the contemporary category romance y’all inflicted on me before. It did take finding a good half hour of uninterrupted reading time to get into the first chapter of this next novel, but since I gained a bit of traction, the going’s been smooth so far.

As I did for my last read, I’ll do my best to keep up with the liveblogging, offering folks on both Smart Bitches and Judge a Book chapter-by-chapter accounts that include my favorite phrases and my insights on the characters’ actions and motives. Without any more flim-flam or foofaraw, then, let’s head into

Chapter 1. In which every soul in Brussels is enumerated, one by one

It is Brussels, early in 1815. The Congress at Vienna has just, unshockingly, declared Napoleon an outlaw. Half of the British peers living in Belgium have assembled in the Earl of Worth’s drawing room to make confusing cross-talk on the political and military goings-on.

Sorting out who’s saying what in this Tolstoyesque opening chapter made it hard to find a foothold. What can be surmised from the start is

1. The Duke of Wellington is pretty much God,
2. Ms. Heyer’s professed fears of being compared to Thackeray (whose Vanity fair also centers in part on Napoleon’s final campaign) are unfounded; their writing styles are entirely dissimilar, and
3. Ms. Heyer loved her some exclamation points. You’d swear these people are a hundred feet apart from one another for all the yelling they’re doing.

Aside from the first page’s careful description of a buxom Belgian babe strutting down the sidewalk and Lady Worth’s marriage-minded connivance at the chapter’s close, you wouldn’t at all suspect this is a “romance” novel.

If the first chapter read like the first of War and peace, the second reads more like Pride and prejudice. There’s even mention of a Darcy (Philip, no relation, presumably). This chapter exists mostly to introduce two no-doubt-soon-to-be-rival love interests, Lucy Devenish and Barbara “Bab” Childe.

In this chapter Lady Judith Worth leads her young charge Lucy Devenish to a party at Lady Charlotte Greville’s, where a startling and gasp-making entrance is made by the widow Lady Barbara Childe (who, if one must compare Heyer to Thackeray, one might consider the Becky Sharp to Lucy’s Amelia Sedley). Got that?

Another day, another ball.

As if we’d not yet had our fill of British peerage, we’re now introduced to Colonel Charles Audley, Judith Worth’s brother, who serves on the Duke of Wellington’s personal staff. He’s just flown in from Vienna, and boy are his epauletted arms tired.

“I got in last night, too late to knock you up,” he tells his sister. Hee hee! Truly this is one of my favorite divergences between British and American slang.

A few pages later and we find ourselves at the Hôtel de Ville, site of a tremendous ball at which will appear the King and Queen of Netherlands, their sons (including William, the Prince of Orange and for the time being the commander of the British Forces in the Low Countries), and most importantly of all, the Duke of Wellington, a man whose appearance may as well be as shoddy as Lieutenant Columbo’s, for all the pains Heyer takes to place his garb in the shadow of the other officers’. The Duke shows his amiability by shaking a few hands and slapping a few backs...were there babies to be kissed, he’d have seen to that as well.

The romantic plot creeps forward and inch or two when Audley, to Judith Worth’s chagrin, looks beyond young Lucy and is struck upside the head (and in other parts, too, no doubt) by Bab’s scandalously-low-cut beauty.

The plot thickens! No sex yet, though. Unless you’re a foot fetishist with a thing for Bab’s gold-plated toes.
Posted by DocTurtle at 8:31 PM

You've been assigned one of Heyer's worst novels. I have them all, and I love her writing (although the romances are indeed in the style of Austen through and through) because her characters are funny and her books are a romp, generally speaking.

It's not just the toenails and the low-cut dress, it's that her dress is see-through.

And chapter 3 is about as far as I got in this book. I can't remember why the bitchery chose this Heyer, but there are others that I loved. Maybe for the "serious" aspect of the history?

One of the few Heyers that I haven't read. Many of her others are good, lighthearted fun.