It's well known that Nazis are evil, most sane people agree, so when cover artists (and movie writers, hack authors, and others) want to show evil, who better to model your characters after than the Nazis?


Here we have those two great forces of evil, the pirates vs. the Nazis: 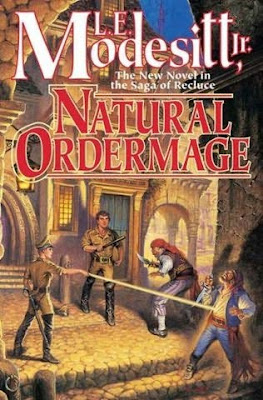 Who are the good guys? I have a sinking suspicion it's the naziesque chick (niiiiice boots, very S and M) wielding the laser against the poor pirate armed only with a knife. Overkill much? But that kinda reminds me of the movie Starship Troopers, in which Dr. Doogie, SS, is mean and kills things. And we're supposed to cheer. Grrrr, I hated that movie.

A really good movie that takes on the whole Nazis vs. good guys is Wizards, in which it's basically the Third Reich vs. the faeries. Buxom faeries kick ass! Boo ya!

So, repeat after me:

See how easy it is?

I've been told that Starship Troopers (the movie) is supposed to be entirely ironic -- that even though Doogie Houser SS and the pretty teen stormtroopers are ostensibly the heroes, we're actually supposed to be reading them as facsists and mindless militarists. The whole thing is supposed to be some kind of satire, and a commentary on the original source material, which is honestly borderline-fascist or at least military triumphalist.

I'm not sure I entirely buy it, though.

You mean I actually "got" it? Ooooh, I feel so hip!

If that was their plan, however, I don't think it worked. Too many people were cheering Herr Doogie for me to be comfortable.

That was exactly my experience with Starship Troopers. Loved it as a great satire of militarism and fascist mentalities, then walked out of the theater to hear people cheering for the fascists in a totally unironic way. I think the satire worked so well it ended up not merely satirizing the fascists in the movie but the proto-fascists in the audience. Given Paul Verhoeven's anti-Nazi credentials (he was raised in the Netherlands during WWII), and his unambiguous comment, in reference to Starship Troopers, that "War makes fascists of us all", I think you could say that the joke is on the morons.

Wow, someone else that knows the movie Wizards? I thought I was all alone in the world.

Well, Heinlein is such a weird dude he probably thinks fascism is a good idea. Verhoeven wouldn't, though.

Maybe it's me, but the uniforms on that cover suggest standard issue police than the Nazis. Of course, I'm a libertarian, who thinks 1)that contemporary police are much too close to fascist (especially with the War on Drugs/Terror/Anything We Disapprove OF) in the power they wield and the attitude they have about wielding that power, so your main point remains valid IMO; and 2)too many people saw Starship Troopers as supporting the mindless Bushian mindset (yes, I know that's oxymoronic), aided by Heinlein's own tendencies in that direction.

I was at a book sale the other day and saw the Omar Tyree book! It was very hard not to laugh.

That bunny cover truly creeped me out. I have a very morbid sense of humor and will laugh at most anything or at least be interested in its differentness. This was not remotely funny or interesting.

To me, Starship Troopers was totally a parody of those vaguely fascist patriotic/propagandha war films that are always popular. Most things with John Wayne are good examples. The fascism aspects were supposed to be over the top, and I think it would have worked except that the individual characters were written wrong. They were too complex and too sympathetic, so it made it seem like maybe the humans were supposed to be paragons of virtue, making it a straight pro-fascist film.

But seeing it subsequent times, I've grown more and more certain that it's supposed to be parody. The propaganda segments are just way too overtly comic, they just scream parody. Unfortunately the rest of the movie doesn't, at least not as loud as it should, so it comes off as a confused mess. It's like they couldn't decide if it was supposed to be a parody of war movies, or a comparison between propaganda and the reality of war,

The original novel though, really does seem borderline fascist. Decent novel, but sort of fascist. Heinlein was a weird guy. And his books have had some... special covers.

I used to go see Wizards for a midnight show when we were bored of Rocky Horror. Good times.

I liked Starship Troopers, but then I assumed it was ironic. If I saw it again today, I would probably be pretty uncomfortable, knowing how little capacity the American public has for detecting irony.

Wizards may have an interesting message, but it's one of the most boring movies I've ever seen. Sorry!

To Snow...Don't tase me, bro! I hope the pirates are the good guys. Pirates are way cooler than Nazis. Love, Sexy Sadie

I have held off writing but I'm really anxious to see other covers. I see your library list is growing, but there have been no other posts. What's a Jewish mother to do??

Congratulations on your nomination. I knew I wasn't the only one who enjoyed your blog, even though I'm biased.

I'd like to take a moment to plug the "Lambeth walk" film produced as anti-Nazi propaganda early in (or just before?) WWII. Several versions are on YouTube, I like http://www.youtube.com/watch?v=XHtEKSg-ycQ They don't quite show Hitler conducting, but there are clips of him gesturing which are run in time with the music.