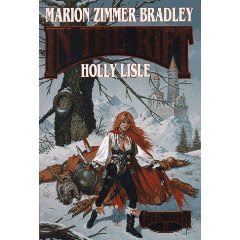 This is a phenomenon of fantasy novel covers that I just don't understand. Slightly bigger pic of the cover art below (Title is In the Rift.) 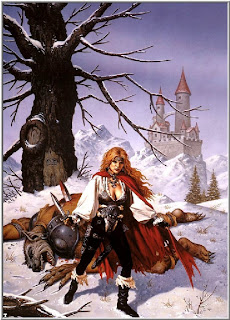 Why would any sane woman (maybe I presume too much?) wear a cloak, a fur chastity belt, fur-lined boots and all-over leather for warmth in a harsh winter climate, yet leave her chest completely uncovered? I suppose it's a good strategy for luring silly male adventurers into her wily trap, but it can lead to all manner of health problems. Seriously, that's sensitive skin she's leaving open to frostbite; after all, nothing is more attractive than a woman whose nipple has cracked off from cold, right? Eww. I'd point out that she apparently carries her dagger in a scabbard meant for a full sized sword, but that's outside the scope of a Mammary Monday post. 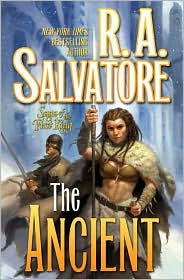 On the same theme, this girl (I assume it's a girl from the brassiere, but the face makes me question that assumption) is so impressed with her own abs that she's willing to risk losing her tatas to the cold just to show them off! Not to mention that bare skin is a terrible defense against a spear!

I'm going to start a new Facebook group: Women for more sensible armor. Who's with me??
Posted by BikerPuppy at 11:45 AM 17 comments: 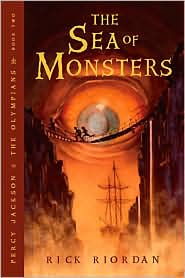 I'm pretty sure this is supposed to be some sort of evil all-seeing eye (and perhaps a goofy play on the title -- See of Monsters?), but all I see is an enormous nipple on an even more enormous tata, being supported by a rope bridge. I guess when your boob is that big, you can't find a really cute, lacy bra (I mean, this must be a ZZZZZZZ cup or something), but a bridge?? Hire a seamstress! And please, for the sake of decency (and the sanity of those poor people escaping across your bra) cover that eyenipple!!
Posted by BikerPuppy at 11:20 AM 18 comments:

What are you trying to protect against? 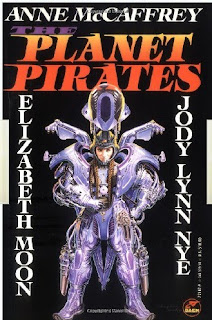 Yikes! This has to be the most frighteningly overdrawn "armor" I've ever seen. It's like the artist couldn't stop adding to it once he or she got going. For starters, unless this is some sort of powered armor (it moves itself) or is made of aluminum foil, I doubt she's going anywhere. As it is, she's forced to stand with her feet almost painfully far apart! But maybe that's just to let her tail show? Or are those swords hanging from her back? It seems to me there's no way she can reach them if they are. I suspect she can't reach the guns on her legs either.

Are those dinosaurs on her shoulders? I suppose we all could use extra "allies" if we need them, but I'd hate to have carnivorous monsters attached so close to my head. Imagine the breath you'd smell when the wind was from the right direction....

And what is with the raised bubble? Maybe it can lower to cover her head, but if it did, she'd look like a mon calamari! 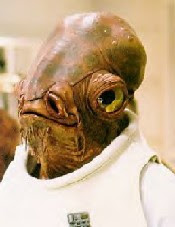 And to top it all off, she's wearing jewelry! Looks like she just got back from Mardi Gras.
Posted by BikerPuppy at 11:39 AM 17 comments:

Today, not just a twofer or a threefer, but a fourfer — continuing my countdown of the 57 books I recently acquired at my local University's Book Sale. Please enjoy Books 8-11.

*****
A Mess of March ... I'm moving all the NGAIO MARSH titles to the front of the queue (literally, Roger Daltrey sang the word "queue" as I typed it just now ... freaky coincidence) because one of my readers seems to have a thing for her :)